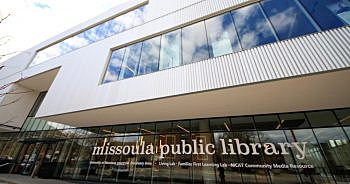 Police officers responded to reports of a male trespasser at the Missoula Public Library on Wednesday and took him into custody after he brandished a knife.

In a statement, the Missoula Police Department said the incident began at around 1:30 p.m. and was resolved more than an hour later.

Department spokesperson Lydia Arnold said offers responded to the library after reports of a trespasser. The male, whose name was not released, had been charged for trespassing at the library before due to threats and inappropriate behavior.

“When officers located the suspect male, the male was non-compliant with officers and their verbal commands,” Arnold said. “The suspect male brandished a knife and barricaded himself into a bathroom.”

Officers negotiated with the male before utilizing other police tactics. They were able to safely disarm the individual and take him into custody.

No injuries were reported, though the library, which is newly opened, was evacuated for the safety of the public. It reopened after the incident was resolved.