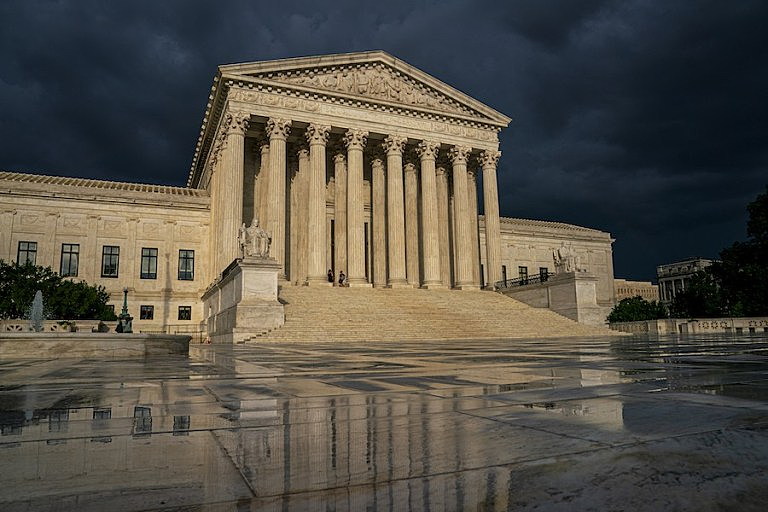 WASHINGTON (CN) — The Supreme Court took up one new case Monday morning, agreeing to hear a roadway dispute between Montana landowners and the federal government.

Undergirding the dispute is a 1962 easement that the U.S. Forest Service obtained for Robbins Gulch Road in rural Montana. Larry Steven Wilkins and Jane Stanton now own the land where the 60-foot easement sits and only had a problem with the government’s use of the road in 2006 when the Forest Service put a sign on the road allowing public access through private lands.

Wilkins and Stanton contend that the increased traffic has brought trespassers and theft, as well as people shooting at their houses and hunting on their land, interfering with their use of their property.

Wilkins and Stanton asked the Forest Service to address problems related to the public access to the road in 2017 but the agency declined to offer any solutions. In 2018, Wilkins and Stanton filed a suit under the Quiet Title Act — a special legal proceeding to determine ownership of real property. But the law also has a 12-year statute of limitations, leading a federal judge to dismiss their case.

After the Ninth Circuit affirmed, Wilkins and Stanton petitioned the Supreme Court this year.

Wilkins and Stanton claim the issue has created a circuit split in the lower courts because it came before recent attempts to redefine what legal rules should be properly characterized as jurisdictional.

“Until recently, this Court has used the term ‘jurisdiction’ inconsistently in dicta, resulting in confusion among lower courts,” attorney Jeffrey McCoy with Pacific Legal Foundation wrote in a brief for the landowners. “It has admittedly ‘sometimes mischaracterized claim-processing rules or elements of a cause of action as jurisdictional limitations, particularly when that characterization was not central to the case, and thus did not require close analysis.’”

The government claims the lower courts made the right call and reflected the decisions of the justices themselves and almost every other circuit.

“The lopsided (7-1) circuit conflict that petitioner asserts between that consensus and an outlier decision of the Seventh Circuit does not warrant this Court’s review,” U.S. Solicitor General Elizabeth Prelogar wrote in the government’s brief.

Prelogar said that, even if there was a circuit spilt on the issue, the case would be a bad vehicle to address the problem since the suit fails the 12-year deadline anyway.

“But even if the question presented otherwise warranted review, this case would be an unsuitable vehicle to address it because petitioners’ suit is barred by the Quiet Title Act’s 12-year deadline regardless of whether that deadline is jurisdictional,” Prelogar wrote.

Per the court’s custom, the justices did not offer any comments on their decision to hear the case.