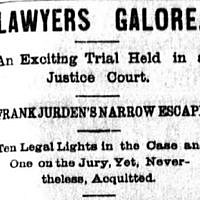 Today’s story could be called “The Curious Case of the Crocheted Tidy,” although I leave such things as headline writing to the vast and experienced staff of Missoula Current, who know far better than I how to lure the unsuspecting reader into this column.

Oh, but first, an important aside.

I must advise, for national security purposes, that this week’s tale as well as last week’s story, were locked up, held against their will for a brief time by my damned-able computer.

While not a conspiracy theorist, I will admit I’ve read a lot in the papers recently about these odious, analog-destroying fiends and their willingness to partner up in subversion, leaks, hacks and crashes  – so, I can’t swear my computer was untouched by Russian keystrokes.

My wife won’t use computers. Wise woman. But I never listen.

But I’ve digressed enough. In gathering up all the pieces from the crash of last week, I noticed I hadn’t yet told you the story of the “Curious Case of the…” or whatever the headline writers call it.

No better time than now.

The defendant: Frank Jurden, accused of cat-burgling a tidy (a small receptacle for one’s odds and ends), valued at $5.

The victim and complainant: M’lle Leontine David, who discovered the theft upon returning home from her … ah … shall we say … nighttime endeavors.

OK, fine. She was a working girl, a lady of the night, but a victim nonetheless.

The local paper described her as “a poor orphan girl, who through unfortunate circumstances, had been thrown upon this cold and clammy world and compelled to eke out her own existence and who could, therefore, ill afford to lose the article in question or any other article possessing a monetary value.”

The county attorney had multiple witnesses and felt he had a “lead-pipe cinch” of a case.

The defendant, a foul-mouthed miscreant known widely in the community, seemed to have no case at all. Who would even defend him in court?

Well it turns out, the answer to that question was: most all of the legal luminaries of Missoula!

When the seemingly minor $5 theft case was called, Jurden was surrounded by “a formidable array of legal talent, consisting of Messrs, Marshall & Corbett, Messrs. Bickford, Stiff & Hershey,” along with a half dozen other top lawyers of the city.

The legal lights sat quietly as the victim’s neighbor and good friend, Miss Georgie Allen, told the jury she saw the defendant with the stolen tidy and confronted him. She said Jurden responded to her accusation with a barrage of epithets that “caused her great pain and subsequent loss of sleep.”

Testifying next, reported the Missoulian, was, “Wing Chung Lung, a prosperous Chinese merchant and manager of the slickest opium joint in all Hell Gate township, (who) swore that he saw this ‘belly man’ hop out of Miss Leontine’s boudoir window with something bulky concealed under his coat.”

The most reputable of the prosecution’s witnesses was local weather prognosticator, W. B. Fawcett, who claimed he was in the vicinity of Miss David’s place (solely “in his official capacity” as a weather observer) when he saw the defendant’s “peculiar conduct.”

When he confronted Jurden, Fawcett claimed the defendant “threatened to perforate his hide with an assortment of leaden pellets” and accused Fawcett of “things that were absolutely unbecoming his station in life.”

The cadre of defense lawyers surprisingly “made no attempt to refute the testimony of the prosecution.”

In its closing argument, the prosecution told the jury the evidence was … well … self-evident; after all, the defense didn’t dispute any of it.

The hour was drawing late when the defense had its turn at closing arguments. First they asked the judge if they could “argue the case in shifts, so that all could have an opportunity to repair to their respective homes for dinner,” but the request was denied.

So they commenced their “general, all-around denial” that the defendant had anything to do with this theft. Then the elite legal defense team played its ace.

The prosecution, they proclaimed, had failed to prove the pilfered container was a “crocheted” tidy (as charged) and “demanded an acquittal as the result of this very important omission.”

The jury “grasped the idea at once” and, on that technicality, found Jurden not guilty.

But, the question remains – why would a dozen of Missoula’s most respected attorneys come to this man’s defense?

The Missoulian newspaper explained it this way.

Jurden, a “sort of assistant horse trainer” at the Missoula racetrack, had “summoned the entire legal fraternity of the city … by various promises of ‘straight tips’ and other inside information” concerning the July horse races.

The paper concluded, upon the jury’s verdict, “the gladdened prisoner fell upon the necks of his overjoyed counsel and promised to reimburse them all handsomely on the 11th, 12th, 13th and 14th days of July.”

No follow-up report, I’m sorry to say, on how those tips paid off.