It’s also useful for finding your way about.

Natives referred to this region as the “Country of the Mountains” or “Shining Mountains.”

Joaquin Miller, who published his “Illustrated History of Montana” in 1894, proposed calling the region’s inhabitants “Montanese.” He much preferred that to “Montanians.” Neither took.

Not satisfied with names, alone, we also seem enamored with “nicknames.”

In Leeson’s “History of Montana 1739-1885,” Montana nicknames included “The Magic City” for Billings, “The Queen of the Mountains” for Helena, “The Beautiful City” for Bozeman, “The Silver City” for Butte and “The West Butte City” for Missoula.

The trouble with nicknames is they aren’t always endearing terms – they can be used to ridicule.

Such is the case with a couple of nicknames in the late 1800s.

Missoulians derisively referred to one of their neighbors as “The Baby County.” Any guesses? We’ll come back to that in a moment.

Here’s another. Helena was once referred to as “The Cracker City.”

Well, if you look up the etymology of “cracker,” you’ll find it was a derogatory term for poor white people in the rural South in the 1800s. It also referred to the crack of whip or a loud braggart.

Turns out, it began as a complimentary reference to Helena’s economic growth, which was then turned sideways by opposing forces during the final campaign to choose a capital city for Montana.

In the summer of 1891, representatives of the American Biscuit Manufacturing company (that’s right – a cracker company) visited “The Cataract City.”

Geez! Now I have to explain another moniker.

Anyway, the biscuit boys told a local Tribune reporter they hadn’t made a final decision of where to locate their cracker plant – both Great Falls and Helena had the cheap water power they needed.

Then they headed over to “The Queen of the Mountains” for a visit.

In October 1891, they announced their choice – Helena would be the site.

The Great Falls Tribune immediately mocked the enterprise, pointing to Helena’s long history of failed economic schemes. “There is one thing about Helena … she always aims high if she does shoot low,” adding, “She should have it. It will add at least three men to her present payroll.”

The next year “Helena for Capital” badges appeared, bearing the image of a ginger snap (from the cracker factory) trimmed out with a ribbon. The Livingston Enterprise called it “a novel idea, but not so handsome in design as several of the badges distributed by other contestants.”

The Anaconda Standard, tongue in cheek, suggested maybe they should add a small cracker to their Anaconda copper button. The Helena Independent newspaper responded: “The suggestion is good. The Helena cracker factory will be running day and night when the Anaconda copper works have passed into a reminiscence.”

It didn’t quite work out that way.

Over the next few years, the Missoulian newspaper (which strongly backed Helena for the state capital) routinely used the “Cracker City” reference in news stories large and small.

“Dr. Parsons took this morning’s train on a short business visit to the Cracker City.”

“Herr Daniel Bandmann and wife returned last evening from the Cracker City, where they gave a very successful performance of Rip Van Winkle.”

A few months before the election, which pitted Anaconda against Helena for the site of the state capital, there was a brief labor dispute at the cracker factory –  a golden opportunity for the Anaconda Standard. 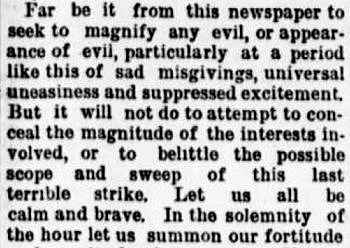 In its story titled “The Climax,” the newspaper wrote: “It is useless to deny that a fearful crash has come; that a totally unexpected crisis has been reached; that the industrial world has experienced a shock which tends to destroy the nature and relation of things that involve them all in hopeless confusion, chaos and collapse.

“Far be it from this newspaper to seek to magnify any evil, or appearance of evil … let us all be calm and brave.”

After a number of lengthy paragraphs, we’re told “an amicable settlement has been reached and the strike declared off.”

Now, did you guess which of Missoula’s neighbors was called the “Baby County?”

It was a short-lived reference (chiefly by the Missoulian newspaper) to Ravalli County after it split off from Missoula, in 1893.

More than 100 years later, little Ravalli County is still around – and increasingly popular for lifestyle and cost of living, borne out each day by the thousands of Bitterroot commuters heading to jobs in Missoula.

And the naming and renaming continues. The “Magic City” of Billings is now referred to by many as “B-Town” (MSU-B, formerly “Eastern,” the B-Town Grill, etc.). Bozeman is “The Bozone.”

It seems we just can’t help ourselves. Why not join in? Do you have some suggestions for new nicknames for Montana cities and towns? Send me a note at harmonshistories@gmail.com.