First I must admit that, by gender, I am absolutely unqualified to write the following story.

But little annoyances like lack of qualifications rarely stop me from sharing fascinating subjects.

An item in the Rosebud County News from September 1903 caught my eye. It was a story titled, “The Ancient Girdle,” which chronicled their use through through the ages.

These days, girdles seem to be out of fashion – replaced by body-shaping undergarments like Spanx. But for a few millennia, girdles were in, not only as body-slimming devices but as status symbols.

Used by a Roman man, a girdle (more like a tight sash) was a sign he was in working mode. “When he took it off and let his tunic fall it was patent to all that business was over and that he was free to speak to his friends at his and their leisure.”

The girdle also symbolized a right or a privilege: “The widow of Phillip I., duke of Burgundy, for instance, renounced her right of succession by putting off her girdle on the duke’s tomb.”

In July 1887, the Helena Weekly Herald published a front-page story titled, “About women’s waists: what they were like in the middle ages.”

The first paragraph pretty well summed up the futility of using the girdle or corset. “In the matter of waists, ladies have always gone to some trouble to improve on nature. Yet their efforts have never been rewarded with success.

“Nature is a jealous as well as exceedingly clever dame, who resents suggestions and lays on penalties when she is meddled with.”

In the 15th century, continued the article, women’s “waists (were) so small that only corsets of the most unyielding type could have produced them.” Humorists of the day referred to them as “whalebone prisons.” 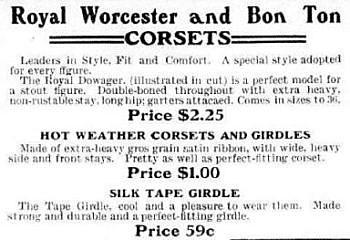 In 1899, the Butte Inter Mountain newspaper reprinted a Paris fashion article, declaring that Parisian women “are reveling in the fact that (the latest gowns have) buttons and girdles, broad lapels and a great deal of fancy braiding.

“To those who want to know the fashionable figure this year only one answer can be made. It is the slim figure … the fat woman is so far out of style that no gowns are made for her and the poor thing must rusticate in last season’s spring gown and vegetate in made over dresses.

But the writer was only warming up. “Unless one has positively reached the limit of embonpoint (pronounced “ahm-bohn-PWAH,” French for “in good shape”) there is hope. The new skirt which is fitted very close to the hips actually makes the hips look smaller. It is as tight as a glove upon the hand, yet like the tight glove it produces an artificial smallness.”

According to an online “History of corsetry,” by the early 20th century the extreme, internal organ-damaging corsets were falling out of favor replaced by the less painful “Gibson Girl” style undergarments. 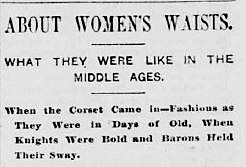 The desired “slimming area” moved south to the hips in the “flapper period” to create the boyish look of that era.

By the 1950s, new materials like nylon and latex rubber were incorporated into girdle design.

Girdles and corsets in today’s society are largely a matter of show business – think Madonna, Beyonce or Lady Gaga in their stage acts.

As I acknowledged at the outset, I can’t “feel your pain,” since I’ve never worn a “whalebone prison.” I have no way of knowing what it’s like to have my internal organs squeezed to the point of damage.

But as my wife points out regularly, men are responsible for all of the world’s evils. So, in my best Canadian, I humbly say, “Sorry.”