I love a good story.

That’s what drew me to a career in journalism and what draws me, in retirement, to reading newspapers of the past.

While Montana newspapers are my main source, there are some other great repositories, like the University of Montana’s catalog of “Graduate Student Theses, Dissertations & Professional Papers, easily accessible online.

Perhaps you’d like to learn about the history of the Deer Lodge Valley, the Northern Pacific land grants or the political life of William Andrews Clark. Name a subject, and a college student has probably written a paper on it.

The railroad land grants paper, by the way, was written by a young college student by the name of Ted Schwinden in 1950. You might remember him in later years as governor of Montana.

I tend to veer off the well-traveled highway of history to little known places on the past’s backroads like “Acculturation of the Finns in Milltown Montana” or a “Survey of Christmas tree production on private lands in western Montana.” 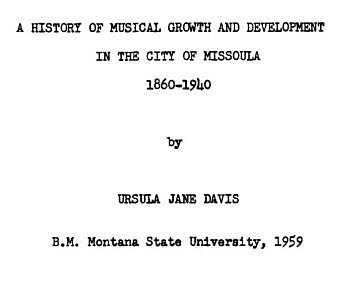 Then, there’s the “History of musical growth and development in the city of Missoula,” a 1960 work by Ursula Jane Davis. She traces the town’s history back to 1858 when “Wild Cat Bill” Hamilton built the first house in the present city limits near Rattlesnake Creek, but concentrates on a 75-year period between 1865 and 1940. It’s a great read, with the kind of nuggets I enjoy.

Davis says “music was a part of Missoula from the time the town was first built.” The town’s first band was believed to be “Bob Pelkey’s String Band,” a seven- or eight-piece group playing at local dances.

A dancing school soon opened, where “the instructor, Mr. J. B. Cavan, provided lute and mandolin music for his students.”

In 1875, Missoula’s first piano arrived. According to Mrs. George Wilcox, her mother, Mrs. Kennett, had an “old square Steinway” shipped from Illinois. That took some doing.

A wagon was used for much of the trip, but “in a number of places … mules were employed. The instrument was strapped to their backs. This at least insured safe passage over the mountains, and in due time the piano was set down, unharmed in Missoula.”

Davis, in her college paper, concentrated on musical history in the public schools. She found that Montana’s first “Course of Study for Rural and Graded Elementary Schools” described music as “a major subject in the curriculum (which) helps develop mental powers, physical control, social adjustment, self-reliance … (and) opportunity for creative expression.”

Although Missoula’s first public school was established in the fall of 1869, with Miss Emma Slack (Dickinson) as the teacher, Davis could find no mention of a music course in high school until 1906, although 15 boys put together a school band in 1895. “They presented their first concert in the Bennett Theater. The music played was from the beginners’ band book.

Amazingly, no documentation of music in the grade school curriculum could be found until 1924. Davis doubted that was the case, writing, “it must have been included prior to that time.”

Across town at Missoula’s other school, Sacred Heart Academy, a music program was established in 1886 with the arrival of Sister Donat from Boston. She was a graduate of the New England Conservatory of Music.

“The music programs of the Academy,” wrote Davis, “continued to be very numerous right through the Depression and up to 1940.” 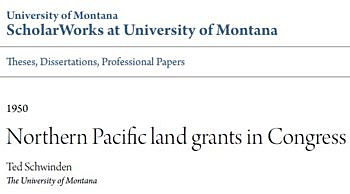 Ursula Jane Davis’ paper is just one of many electronically available from UM. There is something for everyone, like “Some chapters in the history of the Bitter Root Valley” and “The Montana Press and Governor Joseph M. Dixon 1920-1922.”

Perhaps my next read will be a 1955 paper authored by MSU student Elinor Rosemond Larson. It’s titled “Vitamin losses in the drip from thawed poultry.”