It’s pretty exciting when big-name stars make appearances in Montana: Elton John, Paul Simon, Garth Brooks and the like. But it’s not as unusual as today’s press might make it appear.

While we may seem “out of the way” to folks back East, Montana has a long history of drawing the latest fads, entertainment, attractions and big-name talent.

Back in 1864, the entertainment rage was the poly-o-rama panoptique, a viewing device allowing you to see before and after photos or – my heart be still – a building with a door closed morphing to the same building with the door open! A manipulation of lighting within the box resulted in the magical effect.

W.J. Kent brought the device to the Theater Hall in Virginia City in the fall of that year to display a “choice selection of Western and comic pictures.”

In Helena in 1882, Miss Birdie Damon’s songs and character sketches “took (the) citizens by storm.” The Weekly Herald called the performance “more than usually meritorious,” noting long, continuous applause. The newspaper and many prominent citizens petitioned Birdie to stay for additional shows, but she had a tight schedule and had to move on.

That same year, Billings had its first theatrical entertainment when visited by the Boston comic opera company.

By the late 1890s into the 20th century, acts from coast to coast were stopping in Montana. San Francisco baritone Frank Thompson and pianist Maurice Berger spent a night at Missoula’s Florence Hotel in 1894, giving selected guests a private performance, on their way to Spokane.

Hi Henry’s minstrels entertained at the Billings Opera House in 1899. 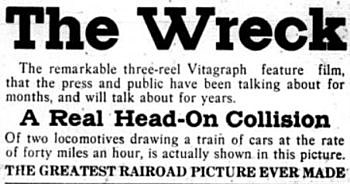 In 1914, Missoula’s Bijou Theater featured “The Wreck,” a new film that was to become a classic. It was billed as “a real head-on collision of two railroad locomotives drawing a train of cars at the rate of forty miles an hour.” Check it out by clicking the link, above. The minute you see it, you’ll recognize it.

Over at Missoula’s Empress Theater, about the same time, a famous British actor and playwright, Sir Edward Hicks, starred as Scrooge in a performance of Dickens’ “A Christmas Carol.”

She was the heart throb of the early 1900s, the Beyonce, the Jennifer Lopez of her day.

“The little French dancer” was rich, famous and gorgeous. She was “credited with upsetting the throne of Portugal,” a reference to one of her many beaus, King Manuel II. The Parisian beauty had tossed aside his royal-ness and confided to an East Coast columnist that she planned to marry her dance partner, Harry Pilcer, and “retire to a small estate in France where she declares she will be content the rest of her life to raise chickens.” That never happened. 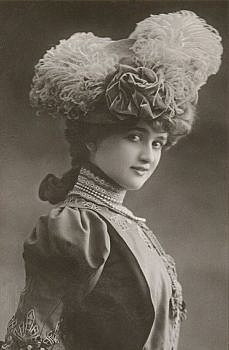 The singer-dancer commanded upward of $5,000 per week for her performances and traveled in a private Pullman train car, accompanied by security guards, $800,000 worth of jewelry (including a string of pearls from ‘ol King Manuel II, himself) and a pet chicken!

We’re informed by a Missoulian newspaper reporter that the pet hen was no run-of-the-mill chicken. She was “a prize Victorian hen named Henriette (who … which) provides fresh eggs for the famous Parisian’s breakfast and always occupied a stateroom in her private Pullman.”

A number of fine hotels, however, barred the prize fowl “which usually peeved Gaby.”

Henriette, the fine Victorian hen, was accompanied by her personal beau, a rooster, “which in California, was dubbed Hiram, in honor of the governor of that state.”

Anyway, Gaby’s agent arrived in Missoula a couple of weeks ahead of the artist to scope out the landscape. C. P. Greneker told Montana reporters the Parisian star has mastered our country’s language and the entire show would be done in English.

He confirmed there would be only one show the night of January 16,1914, explaining Miss Deslys, heading east from San Francisco, had a whole continent to cover.

The young star brought an immense wardrobe, including gowns enough to make a dozen changes during her show. And she brought hats – her signature hats.

Bottomley cautioned readers, however, that “the stage requires exaggeration in styles and its standards are to be followed at some distance, as a rule.” Newspaper cartoonists depicted Deslys gussied up with trees or an entire house on her head.

Interestingly, the only local review of Deslys’ Missoula performance came from Arthur L. Stone, a renowned newspaperman and (soon-to-be) founder of the university’s school of journalism, who admitted he hadn’t even attended the show.

Borrowing from Portland and Spokane newspaper reviews and comments from local theater-goers, Stone estimated “90 percent of the big audience of the Missoula theater Friday night was disappointed in the show” because it wasn’t “spicy” enough.

Stone asserted Missoulians were hoodwinked into attending by Deslys’ press agent – “one of the most artistic liars in the world” – who played up her sex appeal and the boyfriend-ex-Portuguese-King-affair to lure folks to attend. The public, he wrote, “fell for his stuff.”

The columnist complained theaters are “filled when there is rough-house stuff and empty when something worthwhile appears.” He highly recommended Missoulians attend the upcoming performance of “Robin Hood,” which he called “a real opera with real singers – high class, every bit of it.”

“The only uplift” in Deslys’ show, he wrote, “is of heels, the only art’s in clothes.”

Nonetheless, the biggest name of the day, the hottest act of the time had come to out-of-the-way Montana.

Deslys went on to dabble with silent films for a time between 1915 and 1919, but continued to travel the country with her song-and-dance shows. She played three days at the Palace Theater in Great Falls in 1919. By then, she was being billed as “the sensation of Paris” and “the dethroner of kings.” Her costumes were upgraded to a “million dollar wardrobe.”

Sadly, in 1919, Gaby contracted the Spanish flu, resulting in a throat infection. Despite numerous operations, she died in 1920 in Paris.