There are a couple of controversial notions floating about these days which – if you check – actually have a historical foundation:

The media is “the enemy of the people.”

Some would argue that the first notion relates to the “good old days” of post-war America when the middle class thrived and there was an Edsel in every driveway.

But I tend to think of America’s greatness in terms of a civilized free society, self-governed, with ethics and manners.

A front-page story in an 1877 edition of the Weekly Missoulian summed up the ideal American as “a person not merely acquainted with certain forms and etiquette of life, easy and self-possessed in society, but able to speak and act and move in the world without awkwardness, and free from habits which are vulgar and in bad taste.”

The Livingston Enterprise in 1883 cautioned against using “company manners,” that is, “a thin veneer of conventional politeness, through which ignorance and vulgarity are plainly visible.”

Instead, it urged us to be genuine, pointing out that “the difference between good manners and ‘company manners’ is that one is the natural expression of ordinary courtesy, self-control and knowledge of the world, and the other is an effort made for some temporary purpose, or to bring one’s self into harmony with unusually difficult surroundings.”

The Rocky Mountain Husbandman newspaper of 1877 quoted Lord Chesterfield’s letter to his son as an example of what makes a successful leader. “All your Greek (education),” he wrote, “can never advance you from Secretary to Envoy, or from Envoy to Ambassador, but your address, your air, your manner, if good may.” 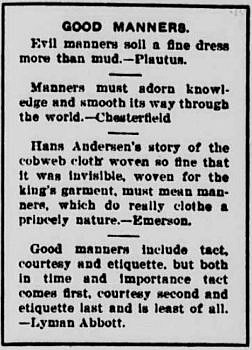 In 1921, Frederick Haskin lamented the perceived loss of civility at the time. He pointed out in his syndicated column, carried in the Great Falls Tribune, that good manners “lubricate personal contacts, saving friction, and at the same time lending dignity to the social spectacle.”

Haskin concluded, “If you only watch the other fellow and listen to him, instead of trying to always assert yourself, you can easily see just what he expects of you.”

Martin, in an interview with Virginia Shea, said: “There are plenty of people who say, ‘We don’t care about etiquette, but we can’t stand the way so-and-so behaves, and we don’t want him around!’ Etiquette doesn’t have the great sanctions that the law has. But the main sanction we do have is in not dealing with these people and isolating them because their behavior is unbearable.”

So, we can all help make America great again, by practicing good manners and etiquette.

As for the second notion – that the media is the enemy of the people – there is a solid historical basis.

Way back in the days of the Roman Empire, the “media” of the day took the form of handwritten “daily gazettes” authored and distributed by the autocratic rulers. They were filled with official proclamations.

In China, through a thousand years and a number of dynasties, rulers distributed government-authorized news, mostly court reports. 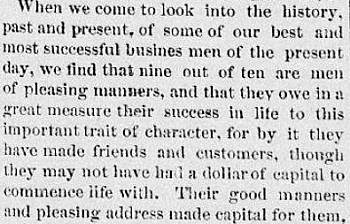 Indeed, for most of human history, the “news of the day” was tightly controlled and dictated by the governing powers – definitely “the enemy of the people.”

Only in more modern times has the notion of a free press – representing the people and challenging those in power – emerged. As late as the 1700s, British journalists were still being imprisoned for offending the Crown.

Today’s American newspapers operate under some of the least restrictive publishing laws in the world – free to cover what they choose, how they choose, and print their opinions without fear.

Those who disagree with the reporting and/or editorial positions of today’s newspapers (labeling them “fake news” or “biased”) would be well served to remember today’s press is rather tame when compared with their 18th and 19th century predecessors.

Back then, there was no attempt to be objective in news coverage. Newspapers, in many cases, were created to be the voice of a political party or point of view.

The Missoulian in the late 1800s was a proud in-your-face Republican publication owned by A. B. Hammond. The July 5, 1894 edition asked, “Why don’t (sic) Grover Cleveland take a tumble and resign before the entire country goes to hell?”

From the national to the local level, the Missoulian had no use for any Democrat.

“The Missoulian does not desire to go on record as saying that the future abode of any Democrat is going to be too warm for comfort, but it unhesitatingly asserts that if hell was in need of new pavements a year ago there have been enough ‘good intentions’ blasted by a year of Democratic rule to supply all the wants of the infernal street commissioners.”

The freedom and independence of the American press – the ability to question and challenge those in power – is the very basis of our republic.

Each of us prefers certain newspapers or TV newscasts to others. But to label those we don’t prefer as the “enemy of the people?” Hardly.

Let’s reserve that depiction for the state-sanctioned or government-owned propaganda outlets like TASS, the Beijing Daily or North Korea’s KCNA.