As a young Montana grade-schooler in the early 1950s, I’d heard the stories – and they scared the hell out of me (although I’d have been sent to the woodshed if I’d actually said that aloud). 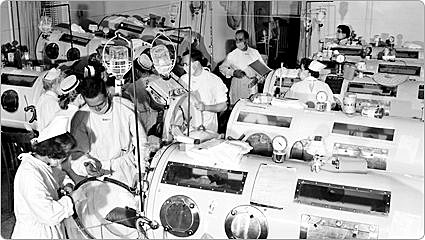 Everyone was talking about “iron lungs” and “poliomyelitis” and how we shouldn’t be playing together in the hot summer months. Our moms showed us how to put dimes into slots in paper cards, for something called the “March of Dimes.”

There was good reason for our parents to be concerned. Words like “terror” and “fear” described the collective mood from the roaring ‘20s to the ‘50s.

“When polio struck a town or a city,” reported the Helena Independent Record, “panic often resulted. Entire families fled to the country, homes and polio apartments were quarantined, rich and poor.”

Even the president of the United States wasn’t immune. Franklin Roosevelt was diagnosed in the early 1920s and was soon paralyzed from the waist down. He had to use leg braces and a wheelchair.

It was Roosevelt who helped found the research that led to the discovery of a vaccine.

Before that, there wasn’t much anyone could do. If the paralysis affected the upper body (the lungs) you couldn’t breathe. A lot of people died.

In late 1928, a new machine (based on a centuries-old concept called “external negative pressure ventilation”) went into widespread use.

Coined the “iron lung” because of its appearance, the hefty airtight cylinder encased the patient from chin to toes, allowing pumps to increase and decrease pressure – forcing the lungs to move. By the 1940s and 1950s, entire wards of hospitals were filled with the devices.

A couple of fellows at Harvard University had come up with the variation on the tank respirator design, which made it the go-to device of the time. Louis Agassiz Shaw and Phillip Drinker combined an electric motor with two vacuum cleaners to automatically change the pressure in the tank.

What was it like to be inside the tank? Marshall Barr, a polio victim from age 7, said: “The mechanics are underneath the machine so you’re laying on the pump. And of course you get the vibration underneath. Like … breathing, bump; breathing, bump … It was not quite like a smooth breath.

“You can eat in the iron lung because your head is outside but the rest of your body is inside, although since you are flat on your back you really need to be careful when you swallow; you have to swallow in rhythm with the machine.”

Martha Mason, who spent over 50 years in an iron lung, wrote a book on the subject called, “Breathe: Life in the Rhythm of an Iron Lung.” It’s an amazing read.

St. Vincent Hospital in Billings and Shodair Hospital in Helena were widely known for their care of polio victims. In fact, Martha Nichols, a physical therapist at Shodair, was credited with inventing “the hitch,” an elastic device that allowed patients to walk without their legs “flaying outward.”

As kids in 1952 we had no clue, but the polio epidemic that year was the worst in our country’s history: 58,000 cases, over 3,000 deaths, and tens of thousands paralyzed.

A couple of years later, in 1954, Lucille Ball and Desi Arnaz, from the “I Love Lucy” TV show, asked us to give money to polio research.

I remember hearing there was a man named “Salt,” or something like that, who figured out how to prevent polio. Turns out it was “Salk” – Jonas Salk – who did the research for the National Foundation for Infantile Paralysis.

But when I saw that damned poster (I know, I’m headed to the woodshed again) – the one with a bunch of smiling kids with their sleeves rolled up – I figured it out. The kids were called “pioneers.” All I knew was they were about to get shots. 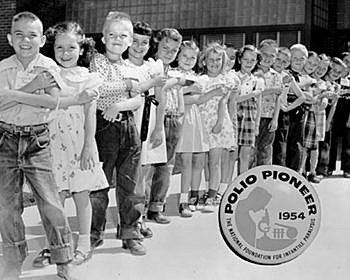 I didn’t yet really grasp the concept of death, so I couldn’t appreciate the life-saving aspect of that inoculation. I just knew I hated shots, and I wasn’t smiling.

It was probably the summer of 1955, but it could have been later. Only now am I reading the newspaper stories of those days – nailing down the time frame.

August 3, 1954, the Helena Independent Record heralded the “the anticipated eradication of polio through a nationwide vaccination program that will reach some 54 million youngsters.”

But first there were the tests with those “Polio Pioneers.”

By the following summer, “about 35,000 first- and second-graders in Montana schools (were) expected to receive their first polio vaccine shots.” That might have included me.

Although the Salk vaccine had been widely distributed in Montana by late 1958, there were still 55 polio cases reported – 10 more than the previous year. The State Board of Health estimated 200,000 Montanans were still not properly protected. 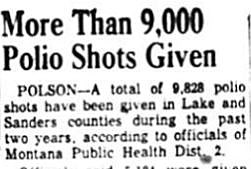 In Lake and Sanders counties, for example, more than 9,000 polio shots had been given, but that covered only 70 percent of the at-risk age group. With an outbreak at Browning, officials worried they had to step up their efforts.

In a few years, though, polio became a rarity – no longer causing fear or panic. The Salk vaccine was replaced by the Sabin vaccine. But it wasn’t until 1979 that no cases were reported in the U.S., and the disease declared eradicated.

Worldwide, though, polio still exists in isolated pockets – Pakistan and Afghanistan, as a couple of examples – but, the numbers are extremely small.

The trouble is, says Dr. Thomas Frieden (who just retired after eight years as head of the CDC): “If we fail to get over the finish line, we will need to continue expensive control measures for the indefinite future. More importantly, without eradication, a resurgence of polio could paralyze more than 200,000 children worldwide every year within a decade.”

Jim Harmon is a longtime Montana broadcaster who writes a weekly history column for Missoula Current.