Remember the “five & dime” store? Every town had one. Inexpensive candy, toys and, well – just about everything, crammed into a retail space with aisles so narrow it was better to turn around than try to pass another shopper.

But did you know there was a nationwide chain of discount stores way back in the 1800s, with locations from Newark and Chicago to Glendive and Missoula?

They were called the “Bee Hive” stores.

The business model was described in one later study as “inexpensively acquired inventory sold in high volumes at bargain prices, with its name suggesting the resultant intensity of sales activity within its walls.” 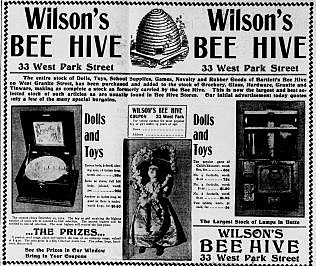 Even though everything was discounted, every day, store operators still managed to have “specials” and advertised them heavily. Helena’s outlet, Genzberger, Barnett & Company, said: “Everything must go. … Our prices will be cut to meet the purses of all.”

When they said “everything,” they meant everything – toys, dolls, wheelbarrows, crockery, lamps, desks.

Missoula’s store, called the “Chicago Bee Hive,” would regularly cut their regular prices by a third or more, for “five days only!”

The store at the corner of Main and Higgins, was a “rickety old structure” with its north wall bulging out. It was so unsafe that in 1894, the fire marshal finally had to order barricades placed on the sidewalks in case the building took “a notion to tumble down.”

The owner, a fella named Sablotzsky, could have cared less. He sold the place to Mrs. Kate McCormick, and left the repairs to her.

A few years ago, when the discounters like Walmart expanded to offer grocery items, they were following the Bee Hive model. 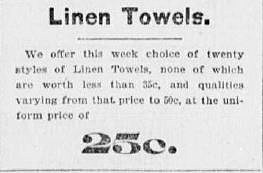 Wilson’s Bee Hive, at 33 West Park Street in Butte, didn’t limit its advertising to low prices – they ran a promotional contest in 1902 to find the city’s “most popular boy or girl under 13 years of age.”

All you had to do was clip the coupon in the Butte Intermountain newspaper, fill in the youngster’s name and address, and drop it off at the store. Prizes included “a perfect steel range, about one quarter the size of an ordinary range, valued at $15 … a music box (and a) large handsome doll.”

In a follow-up ad, Winnie Lindusky, 315 Watson Avenue, was reported to be leading the “girl” entries by a considerable margin, with 233 votes. Willie Davis, 411 East Mercury, led Earnest Woodbury, 617 Henry Avenue, by 20 votes for the boy’s prizes.

The Bee Hive on Central Avenue in Great Falls advertised its “5, 10, 15, 20 and 25 cent counters,” while the Neihart Bee Hive, not to be outdone, claimed it was “selling goods cheaper than Great Falls.”

Many of the Bee Hive stores operated as though they were going out of business – on a regular basis.

“The Bee Hive stock will be sold the next ten days at sweeping discounts,” advertised the Kalispell Bee Hive, located on First Avenue East. “Those who have tickets, present them and get the benefit of this slaughter of prices.

“This stock must all be sold, and we agree to sell this as low as it can be bought at wholesale.

“Fine chinaware at half price. This gives you an opportunity to save your honest dollars. Everything goes.”

And you thought that was a modern-day sales ploy!

While most Bee Hive stores began disappearing from the retail landscape by the early 1900s, some lasted for decades more.

Next time you visit your favorite modern-day discount center, check to see if they have a “price match” guarantee. If so, print out some of the ads from this story and check their reaction.

Jim Harmon is a longtime Missoula news broadcaster and history buff who writes a weekly column for Missoula Current.