Events of the past week have brought back haunting memories of our country’s – and our state’s – past racism, hatred and prejudice.

Each week, this column revisits newspaper stories of Montana life over the past century and a half, pointing out how much we’ve changed – how much progress we’ve made.

But at times like these, it’s natural to wonder if we will ever be capable of overcoming our darker tendencies. Sheldon Harnick lyrics in “The Merry Minuet” popularized by the Kingston Trio in 1959 come to mind.

The whole world is festering with unhappy souls.

The French hate the Germans.

The Germans hate the Poles.

South Africans hate the Dutch and

Missoula’s first newspaper – in its first edition – in September 1870 made clear it had no use for Chinese. The Missoula and Cedar-Creek Pioneer proclaimed in its mission statement, “We shall deal in no gentle mood with those in our midst who would impede the onward march of empire by fostering and giving employment to heathen Asiatic slaves in preference to the free-born, large-souled and intelligent white men who have ever composed the glorious vanguard of American civilization.”

Just over a decade later in 1882, Congress passed the Chinese Exclusion Act – barring, for the first time, a specific race of immigrants. Newspapers of the day were filled with references to the “cunning heathens,” “Montana’s Mongolian population,” the “pigtails of the garden city,” and “almond-eyed cooks and laundrymen,”

In the fall of 1894, the Neihart Herald printed the Montana GOP platform, demanding “strict enforcement of the law for exclusion of Chinese,” to protect American jobs and wages.

Around that same time, Catholics and non-English speakers were being targeted as well.

The Philipsburg Mail carried a story outlining the principals of the APA (American Protective Association). The anti-Catholic group demanded immigration reform to make sure that, “no aliens be permitted to vote who cannot speak the language of the land…” and that no Catholics be allowed to teach in any school.

In Butte, a couple of saloon owners put APA banners on the front of their buildings, sparking violence. One of the bars was “partially demolished by an explosion of giant powder” and the other was “a complete wreck before the day was over.” Rioting broke out with seven people shot, and one killed. 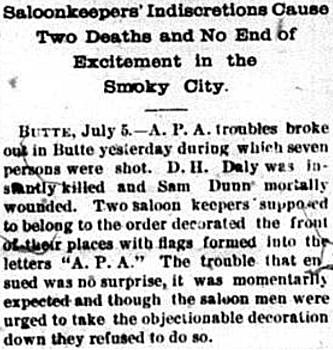 Near the end of the 19th century, the Missoulian newspaper would, on one day, refer to “nigger soldiers marching,” then, on another day, call Fort Missoula’s chaplain, a black man, “a gentleman of education, refinement and unquestioned honor,” when he complained of being discriminated against at a local restaurant.

In 1902, the Rosebud County news in Forsyth noted “the Indians (have) become thoroughly civilized of late years.” The Yellowstone Monitor in Glendive, in a 1915 sports section, referred to the pitcher of team from the town of Savage, as a “lanky redskin.” To this day, controversy remains over the use of disparaging names and symbols in sports.

The Ku Klux Klan tried to organize in Montana in the early 1920s but was met with considerable opposition. The Great Falls Tribune devoted its June 2, 1922 editorial page to the subject. 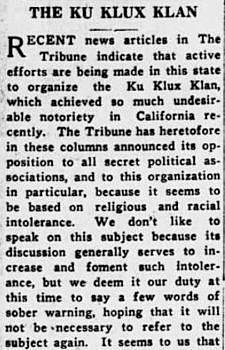 “We don’t like to speak on this subject because its discussion generally serves to increase and foment such intolerance, but we deem it our duty at this time to say a few words of sober warning, hoping that it will not be necessary to refer to the subject again.

“We have had an anti Masonic political party in this country, a know nothing party, an A. P. A. party, and various outbreaks of anti-Catholic or anti-Jewish, or anti-foreign sentiment. They always pass by in time, because the intelligent, patriotic American citizen kills these spurious American movements when he wakes up to their evil effect.

“We hope and believe intelligent and patriotic Americans in this state will give it a cold reception.”