Harmon’s Histories: Montana eclipses of yore suggest we’re in for an eerie chill

We’re just a week away from the highly hyped Great American Eclipse on Monday, Aug. 21 – so dubbed because it’s the first total eclipse (since 1776) solely visible here, and in no other country. 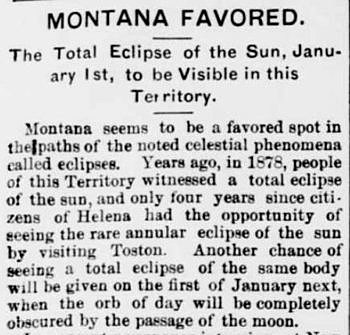 If you want to witness the total (100 percent) eclipse, you’ll have to travel to Idaho Falls or other locations in the direct path of the moon’s shadow across the U.S.

For most of us, it will be a first-of-a-kind experience. So what will it be like?

Let’s open our old newspaper file for the answer.

“Gradually the light of day became more dim until even in well-lighted rooms it was too dark to work except near a window, and the whole landscape assumed a peculiar murky hue that we have never noted except at times of sun eclipse,” according to a March 1885 article in the Livingston Enterprise newspaper.

The Helena Herald described the sudden loss of light and heat as causing “chickens (to) go to roost and observers frequently shiver with the sudden lowering of the temperature of the air.”

Garrett T. Serviss, then-secretary of the American Astronomical Society, told reporters “there is hardly any phenomenon of the heavens at once so startling, so beautiful and so awe inspiring” as a total eclipse of the sun.

More than 80 Helena residents booked a special excursion train to take them to Tosten, (about 45 miles southeast) where the 1885 eclipse would be “total.”

Of course, wouldn’t you know it, those rascally Helenaites turned the trip into a party. G. Chandler “appropriated the conductor’s cap and collected the tickets, seconded by Dr. A. F. Foote, who acted as the ticket puncher.”

The Herald reporter described someone swiping a fellow passenger’s field glasses from his shoulder case. “After a few minutes of excited search, the glasses were found in the possession of a young lady, who, of course, looked the picture of innocence when they were discovered in her hands.”

The train paused for a short time at Townsend where the Helenaites “stopped in at the different places of refreshment to get a drink of water (and) well nigh exhausted” the local post office of its supply of playing cards, which became the entertainment for the rest of the trip.

The train pulled into Tosten about 9:30 a.m. under cloudy skies. “The whole party alighted from the train and stood in groups on the station platform. A few minutes past 10 … the eclipse (reached totality) … and for two minutes the whole party stood with admiring eyes watching the wonderful phenomenon.”

The paper reported, “The annularity was perfect, and the ring of light around the moon was discernible to the naked eye of all who stood upon the station platform at Toston observing the phenomenon.

“During the return trip, the Apollo Club rendered some songs, after which the occupants of the car joined in rollicking songs and choruses, and had a merry time generally.”

There were others in Toston that day who were a bit more serious.

George Reeve, C. T. Day and Frank Jones were on a scientific mission. They wanted to pinpoint the exact location of Toston and Helena.

Strange as it may seem today, with satellites and GPS, back in 1885 calculations of the longitude of Helena had “varied from 111 degrees, 59 minutes to 112 degrees, 20 minutes.”

They “set up their table, and soon had themselves in telegraphic communication with the Washington Observatory. 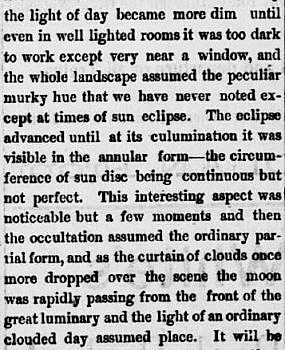 “Mr. Reeves had two chronometers with him, one marking Helena local time and the other that of the 105th meridian, or standard mountain time, set by signals from the Washington Observatory. The time signals from Washington were received by Mr. Day, (who came from) the Western Union telegraph office at Helena.”

Despite the cloudiness that day, “the eclipse was distinct enough for the observations (to be) taken, and has settled beyond a doubt the exact longitude of Helena” is 112 degrees. Toston’s latitude was nailed down at 46 degrees, 10 minutes, 41.5 seconds.

At MSU-Bozeman, the Montana Space Grant Consortium is part of a nationwide Eclipse Ballooning Project.

Students will be conducting “high-altitude balloon (HAB) flights from about 25 locations across the total eclipse path, from Oregon to South Carolina, sending live video and images from near space to the NASA website.”

Of course, a sharp Montana business owner can’t pass up an opportunity like an eclipse to increase sales. Back in 1869 in anticipation of an eclipse, Helena’s Keyus saloon took out newspaper ads proclaiming they would “eclipse everything in the mountains in the preparation of refreshing beverages” for their customers.

This time around, I see Krispy Kreme doughnuts are going to be “eclipsed by a mouth-watering chocolate glaze,” giving its customers’ taste buds the same ” total sensory experience” as the visual impact of the eclipse.

So sit back, don your eclipse eyewear, pour yourself a refreshing beverage, savor your chocolate doughnut, and enjoy. Oh, don’t forget the blanket –  in case those 19th century reports of a chill in the air prove accurate.