I was trying really, really hard this week to concentrate on some important historical stories. But, I failed – sidetracked again.

This has happened before, and it concerns me. Entering my 70s, I worry about memory loss, inability to focus and the like.

So I was leafing through Missoula’s 1898 Daily Democrat-Messenger newspaper in search of serious fodder for this column when my eye wandered to a story about a bear – Otto Siegel’s pet bear.

Seems it had been roaming a bit too freely about Missoula. The newspaper reported Judge Landers fined Otto $1, on “a charge of maintaining a nuisance in not having the animal caged.”

Siegel was reported to have “cheerfully paid the fine” and agreed to “display the diminutive bruin in a glass case … free from torment and tormentor alike.”

Not important. You won’t find that in any Montana history book. I’m just easily distracted these days. 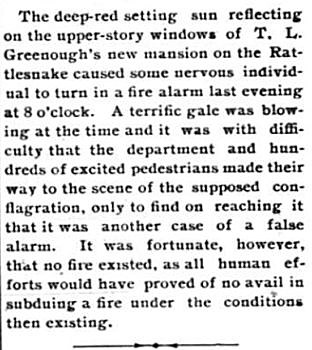 Anyway, Pullam Brothers’ Corner Grocery really wanted to let readers know that they had this coffee – exclusively – like, no one else had this brand – only them!

“Positively … this is the only place in the city where this excellent coffee can be procured,” adding “Enuf said.”

But, that apparently wasn’t “enuf said,” since they said even more.

As I was contemplating an interesting conversation with the White Squadron speaking coffee, I was distracted by a ruckus up the Rattlesnake.

The 1898 paper said there was a “terrific gale” blowing, and someone mistook the “deep-red setting sun reflecting on the upper-story windows of T. L. Greenough’s new mansion” as a fire, and turned in an alarm!

The fire department and “hundreds of excited pedestrians made their way to the scene” only to be disappointed.

It would take another century before the Greenough Mansion actually burned down, replaced by a replica called “The Keep” on Missoula’s South Hills.

Meantime, Judge Landers was still making news, dealing with “a couple of well-known lads” charged with petit larceny. The Democrat-Messenger reported the judge was growing “weary from monkeying with these boys” and was contemplating a stiff sentence.

Over at the U (in 1898, MSU), editors were about to issue a new spring publication, “one the students are entering into with much enthusiasm.” It was expected by the following fall, the student publication would be “a regular feature.”

Then I noticed that the county was taking on the Catholics, trying to collect taxes from the Society of Jesus. County Attorney A. L. Duncan filed the case in district court. I’ll have to read on, and see how that came out, for a future report.

So many distractions. Perhaps I should stop in at a brew pub and have a drink. 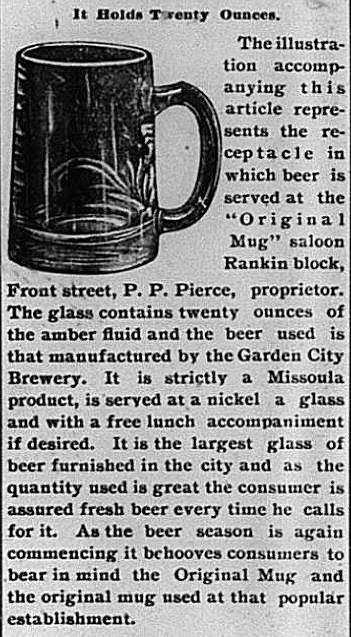 That causes my eye to focus on an ad for the “Original Mug” saloon.  P. P. Pierce, the proprietor, is featuring – what else – a 20-ounce glass called the “Original Mug” designed to hold the “amber fluid” concocted by the local Garden City Brewery.

Remember, it’s 1898. And you thought local breweries were something trendy and new to Missoula!

This particular mug was held out as the “largest glass of beer furnished in the city,” and you certainly couldn’t beat the price: “a nickel a glass and with a free lunch accompaniment if desired.”

If desired? Me thinks so!

As it turns out, ducking into the local saloon would be a great idea – seems a big storm may be on the way.

My trusty Daily Democrat-Messenger newspaper reports the swallows are flying low, a sure sign of a storm.

“When bad weather is imminent, swallows fly low, because at such times the insects which constitute their food keep near the ground, and the swallows are forced to follow them on to lower regions than at other seasons.”

Perhaps next week, I’ll be less distracted and have something of more substance.

For now, I think I’ll seek out a 20-ouncer, and hunker down.