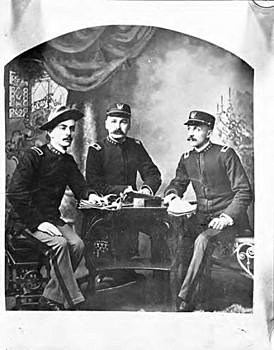 That fairly well sums up my knowledge of the Spanish-American War.

The U. S. battleship Maine mysteriously blew up in Havana harbor, killing all aboard. The frenzied American press blamed Spain (which then controlled Cuba). Soon enough, war was declared and off rode Teddy with his “cowboys” to save the day.

But there were some real cowboys – some “rough and bronzed” men – from Montana and other parts of the West who also answered the call to duty. They just lacked Teddy’s charisma and press corps.

In Missoula, Will Cave recruited 50 volunteers in just a few hours following the destruction of the Maine, something repeated by others in Miles City, Billings, Helena, Butte and all across the state.

Author Otto L. Sues wrote, “In no state in the Union can there be found a broader patriotism or a more ready response to a call for duty … than in Montana.”

A week later, on May 2, the Anaconda Standard carried a special report that four cavalry troops had been allotted to Montana, one each “from Butte, Missoula, Billings and Miles City, and perhaps one from Bozeman.”

As infantry recruits gathered in Helena awaiting orders, the cavalry volunteers learned they would be part of “Grigsby’s Cowboys.”

Grigsby? Most Montanans had never heard of Col. Melvin Grigsby.

The Missoula Democrat-Messenger newspaper soon declared “the mystery … has been solved,” in a front-page article titled, “Who Colonel Grigsby Is.” 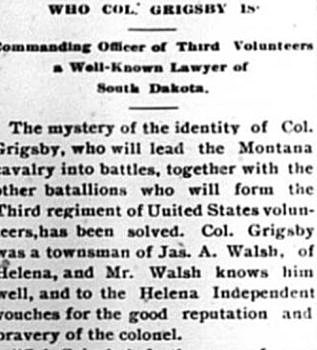 Raised in Grigsby Hollow in Grant County, Wisconsin, he enlisted in the U. S. Cavalry when the Civil War broke out and later became a lawyer. He moved to Sioux Falls where he set up a practice and eventually became South Dakota’s attorney general.

Alas, Grigsby’s Cowboys were to be part of the Third Regiment – the Third, not the First.

The First Division (including – you guessed it – Teddy and his boys) was pressed into immediate active duty in both Cuba and the Philippines.

The Second was assigned to coastal defense, and the Third? Well the Third was to be held in reserve. Whether they would see any action was uncertain.

Missoula’s Troop D was mustered into service on May 13, 1898, and officially renamed the 3rd U. S. Volunteer Cavalry, Troop F, before a crowd of nearly a thousand onlookers at the Union opera house. They would be led by Capt. Frank Higgins and 1st Lt. Will Cave.

The 83 men reported to Fort Missoula to be outfitted and quickly trained. Meantime, Missoulians busied themselves preparing for a grand send-off.

When word came on May 22 that the men were to report to Camp Thomas, Chicamauga, Tennessee, “Hasty decorations were displayed about the city (and a) parade (was planned) about 9 o’clock on Higgins Avenue.”

Led by the university band, veterans groups, the mayor and schoolchildren, the troops marched to the railroad depot where “the crowd (estimated at 3,000) was so dense that it was with difficulty the management of the train was perfected.”

The Daily Democrat-Messenger’s reporter wrote of “fond farewells and tearful adieus, some of which tried even the strongest heart … the wet eyes of the many relatives who were looking at their sons and brothers for probably the last time.” 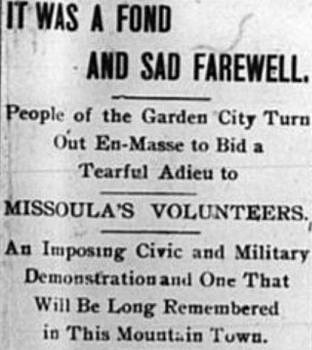 As the band played “‘The Girl I Left Behind Me,” the troops boarded the train, along with their mascot, “a cute little dog, the property of Private Story, named ‘Admiral Dewey.’ “

The war was, as they say, nearly over before it began. The men of Missoula’s Troop F saw no action and were mustered out by September. But Montana volunteers were praised, literally, from coast to coast.

The New York Herald, in a snarky article referring to Teddy’s Rough Riders as “Fifth Avenue dudes and so-called cowboys,” called Grigsby’s men “perhaps not as pretty as Roosevelt’s … (but) they are big, bronzed fellows, every one born a horseman and a dead shot, every one used to exposure and hardened.”

Meantime in a dispatch from San Francisco, carried in the Anaconda Standard, the volunteers assigned to the Philippines, were described as “big, burly men, these from Montana … there are no boys among them … the jolliest set that ever landed in San Francisco.”

An apt description of Montana men even today … as I feebly attempt to pump up my chest.

Perhaps I should settle for “jolly.”