Although the pace with which Montana’s newspapers are being scanned, digitized and made available to the public seems glacial to some (aka, me), progress is being made.

The State Historical Society sent me an e-mail the other day, trumpeting new additions to the digitized collection. Despite that snarky “glacial” remark, I’m thoroughly delighted every time there’s a new release.

While I still spend considerable time going through old microfilm, digitizing material myself, it’s great when others add to the bounty.

Among some of the newer titles are the 1883 The Miles City Daily Rustler, the 1885 Choteau Calumet, and the 1940 Eureka Ksanka Annex (the Lincoln County High School student newspaper).

Now, if you browse by location – and click on Missoula – the first thing that comes up is the 1983 Hellgate High School Lance. Paging through you’ll find some interesting columns – one penned by the paper’s editor, a Hellgate senior, who was writing his last few offerings before graduation.

One was titled “Prom Fruit,” in which he recounted the sad experiences one couple (Earl and Linda) at the previous year’s event.

Earl’s tuxedo was three sizes too small; the color was wrong – he’d ordered blue, but they delivered orange; and all night long prom-goers approached him “asking where (his) ‘Sunkist’ stamp was.” Linda wore a wonderful yellow dress, but given the paring, “the same people who had called (him) ‘Sunkist’ began calling her ‘Chiquita.’ “

The worst was yet to come.

The band dedicated a selection to Earl and Linda, referring to them as the “Produce Department.” The song – “Tangerine.”

By now, you’ve gathered Hellgate High School’s newspaper editor of 1983 had a bit of campy comicality. So, not unexpectedly, the subject one week turned to toilets.

That’s right – get ready for some potty talk.

“Bathrooms,” wrote this young man, “are considered boring by most of society, but I find them rather intriguing. Believe it or not, some of my best thinking has been done in the commode.”

Among his potty ponderings was the fact that “film stars never go to the bathroom.” Think about it. Do you ever remember seeing Captain Kirk leave the bridge of the Enterprise to go potty? Didn’t happen.

“When dining in an elegant restaurant, no one ever says, ‘I’m heading to the can.'” They just politely excuse themselves.

What about toilet paper? People are very particular. There’s the consistency – it has to feel soft to the touch – but, more importantly is “the way the roll is placed on the holder.” Should it “come over the top of the roll (or) … out underneath,” he ponders.

Then, there’s potty poetry – you know, the graffiti on the wall. Our columnist cites one fine example:

“I once knew a man named Spratt,

Who was incredibly fat,

One day he went home,

Where his pets freely roam,

And found he sat down on a cat.”

“For me,” he writes, “the above poem is as inspirational as any works of Longfellow.”

Among the various restroom monikers, our Hellgate senior listed “can” and “biffy,” but concluded his column with one he’d left out.

“I nearly forgot to mention another term used to describe the bathroom – john. I guess both of us are sometimes full of it. Ironic, isn’t it?”

Our high school newspaper editor and columnist went on to write for the Missoulian for a time and eventually dabble in politics. 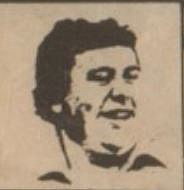 I hear he’s now up for re-election as mayor of Missoula.

As another Missoulian famously said, “Now, you know the rest of the story.”