For teachers attending the upcoming MEA-MFT Educators Conference in Missoula, here’s a bit of perspective from the past. 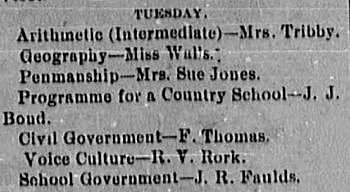 October 1887 in Montana was wet – rainy and muddy. Eggs were scarce, too.

Among the weather and commodity reports in the local papers were some brief items about education.

On the opening day of school, Miss Van Fleet (one of three teachers at Missoula’s schoolhouse) found a box on her desk, containing a piece of rawhide and a note.

“Miss Van Fleet,” said the note, “I think you will have use for this.”

The local newspaper, while acknowledging that “some of her boys are of raw-hidable age,” assured readers “Miss Van (Fleet) will govern her scholars with love, and the boys are indeed tough who can withstand her winning ways.”

A couple of weeks after school commenced, the “rawhidable-aged” boys had a three-day reprieve, as Missoula hosted the fifth annual “Teachers’ Institute.”

Now – for many participants – that took considerable effort. You didn’t just carpool for a short drive from Hamilton or Plains. Remember, it’s 1887. Miss Louise Schaplay had to leave Thompson Falls on Saturday to attend the Monday-through-Wednesday events.

J.R. Faulds, the editor and publisher of Stevensville’s North West Tribune, hosted the conference, which opened with a round of “Gospel Hymns … followed by prayer,” then the roll call, with “each member respond(ing) with a quotation.”

Hygiene was a big deal in the late 1880s. Typhoid, scarlet fever and diphtheria were commonplace. The Weekly Missoulian newspaper ran an account of one man who blamed his illness on a debris pile being used as fill material at Higgins Avenue and Front Street. “It will be remembered that the stench was frightful and was susceptible of being cut with a knife.”

Mrs. Sue Jones captivated the assembled teachers with her views on “Penmanship.” Today, of course, penmanship (or cursive writing) is viewed as old-fashioned and unnecessary – after all, we “keyboard,” rather than write.

Miss Tillie Rosebaum had a segment on “Vocal Music in the Common Schools” followed by R. V. Rork’s explanation of “Voice Culture.” That one sent me to the dictionary.

“Voice Culture” is training your “vocal organs” to become more “melodious,” by understanding anatomy, psychology and other factors – then, training a lot.

Professor Rork “illustrated his ideas on Voice Culture by a few experiments in which he was aided by Mr. Miller and Miss Buck.”

Miss Shappia conducted a session on “Diacritical Marking” (those little marks or signs, placed over top letters, to help with pronunciation – like “piña colada”).

But, a presentation by Miss M. E. Longstaff caused a double-take. Her subject was, “The Hobby Rider.”

It turns out “Hobby Rider” was a short story about an annoying richling written by a fellow with the unusual name of Jerome K. Jerome.

Jerome was English – a playwright, novelist, and at times a school teacher and journalist, who was best-known for his humor, described by the Encyclopedia Britannica as ” warm, unsatirical, and unintellectual.”

Quite by accident, I had run across a book by Jerome, a few years ago, titled “The Idle Thoughts of an Idle Fellow,” published in 1886. The book is still available at a few libraries, or can be read online.

I found it delightful. Among Jerome’s observations:

“Idling always has been my strong point. I take no credit to myself in the matter – it is a gift. Few possess it. There are plenty of lazy people and plenty of slow-coaches, but a genuine idler is a rarity.”

“I like work: it fascinates me. I can sit and look at it for hours.”

Then, there was Jerome’s observation on honesty: “It is always the best policy to speak the truth – unless, of course, you are an exceptionally good liar.”

But I’ve digressed. Back to the teachers’ institute.

There was a bit of unrest. A number of teachers who were scheduled to make presentations didn’t show up, requiring attendees to cover for them.

That resulted in a group resolution, “That it is the sense of this institute that those teachers who have unnecessarily absented themselves should receive a personal censure from the county superintendent.”

On a more upbeat note, it wasn’t all work.

After each session, there was a 10-minute break during which the teachers socialized with each other and visited with parents and students who came to observe. Other times, the teachers were entertained by the musically inclined attendees.

2017’s conference will be a bit different with presentations on “Preparing Youth for The New World Of Automation” and a “Social Justice Training Program.” There’s also one reflecting my specialty: “Undisciplined Writing.”

Whatever happens, be sure to show up! Remember 1887’s resolution to hand out “a personal censure from the county superintendent” to all absentees.