Paging through Montana’s earliest newspaper, The Montana Post, I noticed a 1865 advertisement for an Academy for Young Ladies, located in St. Ignatius. Some of the requirements were humorous by today’s standards, including the necessity for the girls to supply their own eating utensils.

But first, we need the backstory.

In the fall of 1864, four nuns from the Sisters of Providence, along with three priests and two guides, left Walla Walla headed east to establish a boarding school at the St. Ignatius Mission in Montana.

Roads back then were occasional at best, so their plan to use a big prairie schooner was quickly abandoned. Instead, the Sisters (three of whom were under the age of 21) rode horseback and slept on the ground, according to Dorothy Johnson in her book “Some Went West.”

For a month, the Sisters used ” their saddles as pillows” and ate food “gritty with wind-blown sand,” until they finally reached the settlement of Frenchtown.

There, local miners advised them to turn back. “You can’t possibly live in St. Ignatius. No white woman could,” they warned.

Undeterred, they pressed on, arriving at the Mission on Oct. 15, 1864 to find only a scattering of buildings. In the decade since the first priests arrived, a log chapel had been constructed along with a couple of houses, but their school building wasn’t finished yet.

Just as well – before they could teach the Indian children they needed to learn the native language (Salish) as well as brush up on their own English, since their native language was French.

The priests at the mission had attempted to teach local Indian children, but had found the traditional day school wasn’t working. “The Sisters’ assignment was to establish a boarding school,” wrote Johnson, “where little girls could live and learn and still be near their families.”

Funding was a problem from the beginning. Gerald Kelly, in his 1954 master’s thesis at UM (then, MSU) on the history of the St. Ignatius Mission noted that although the Council Grove Treaty of 1855 pledged “school teachers,” specifics were a bit hazy.

Kelly said, “Agreement was reached between Governor Stevens and Father Hoeeken, in which the missionary agreed to perform for the government the conducting of schools with certain government financial assistance.”

That financial assistance didn’t come. “The work of the mission (and the school),” wrote Kelly, “continued only by the aid of Father De Smet and the generous contributors of the St. Louis area.”

Now – to that advertisement mentioned at the beginning of this story. Beyond the original purpose of Indian education, the nuns became aware there were a few married settlers with families among the mostly single male population of the rugged Montana territory. Those children also needed schooling.

So the Sisters placed an advertisement for their Academy of the Holy Family for Young Ladies in the Territory’s only newspaper, Virginia City’s Montana Post. 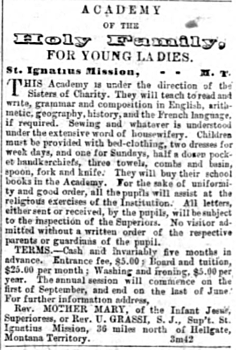 The Academy advertised the standard reading, writing and arithmetic but also offered instruction in geography, history and the French language, “if required.” Also to be taught were sewing and other skills, under the heading of “Housewifery.”

Parents were advised that “children must be provided with bed clothing, two dresses for weekdays and one for Sundays, half a dozen pocket handkerchiefs, three towels, combs and basin.”

Monthly tuition and board was $25. Students, though, were expected to supply their own “spoon, fork and knife.” Laundry services ran an extra five bucks a year.

The school year would be nine months long, from September to the end of May. The terms were “cash, and invariably five months in advance.”

I have to admit, I missed the paradox in the address, but author Dorothy Johnson pointed it out.

“What an embarrassing address for a religious school,” she wrote, “36 miles north of Hellgate!”