The outlook wasn’t bright for the Mighty Griz that day; the score stood 14-12, with but seconds left to play.

With apologies to Ernest Thayer, the author of 1888’s “Casey at the Bat,” and to all of you for purloining baseball poetry for a football story, the mood was similar on a fall afternoon in 1929 when the Griz were moments away from their first potential loss to the Bobcats in 20 years.

The game was played in Butte. The Cats scored early in the game with a kickoff return to midfield followed by a long pass to an open receiver in the end zone. The score: 7-0.

It only took five minutes, though, for the Griz to respond, recovering a Cat fumble, then executing four running plays – the final one, a 15-yard scramble for a touchdown. But they muffed the extra point. The score: 7-6.

In the second quarter, the Grizzlies quickly marched down the field, threatening to score, but fumbled. The turnover, combined with a strange penalty a few minutes later, set up the Cat’s second touchdown. Now it was 14-6.

The Griz responded, “(carrying) the ball up the field from the kickoff after the touchdown to make their second score,” reported legendary Missoulian sports editor Ray Rocene. But again, they couldn’t convert the point after, and now trailed the Cats 14-12. 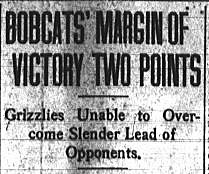 Still, Griz fans weren’t worried. There was plenty of time and their team easily maneuvered down the field for what appeared to be certain scores.

Three times in the second half the Griz were inside the Cat’s 10-yard line. But they couldn’t put it across.

Finally, with time running short, Missoula marched from their own 19 to the Cat’s 5-yard line but Rocene recounted, “The pistol, ending the game, sounded before another play could be put away.”

As with many close games, the loss could be traced back farther than those failed, final drives.

Twice the Griz misfired on point-after attempts. Then there was that strange penalty early in the game when the Griz led 12-7.

Rocene described the penalty this way: “A 15-yard penalty for talking from the sidelines by Ryan, who was warming up, gave the Bobcats their second touchdown. The umpire ordered the penalty which put the ball on the University three-yard line.

“Three times the Bobcat backs banged hard at the line and not a yard did they advance the ball. Then an end-around play … fooled the Grizzlies and the brilliant wing guardian raced across the goal line at the opposite corner of the gridiron.”

“Talking from the sidelines?” Say what? Never heard of it. So, I turned to some experts. 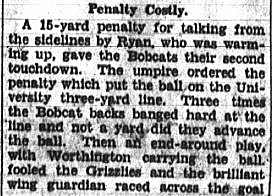 Mick Holien, a longtime fellow broadcaster and “Voice of the Griz,” was as perplexed as I. “Talking on the sideline?” No idea.

Next up, Gary Hughes, a colleague in the Missoula Senior Forum and retired UM associate athletic director of internal affairs and longtime Grizzly Athletics ticket manager. Again, no help – as confused as I.

So I speed-dialed another longtime fellow broadcaster, Bill Schwanke (aka “Grizzly Bill’), and – pay-dirt!

Schwanke surmised it must have been “taunting or disruptive vocalizing at the snap.” Sounds plausible, and offers a cautionary note for next week’s Griz-Cat showdown.

Shhhh – Quiet on the sidelines!

It could cost either side the win.