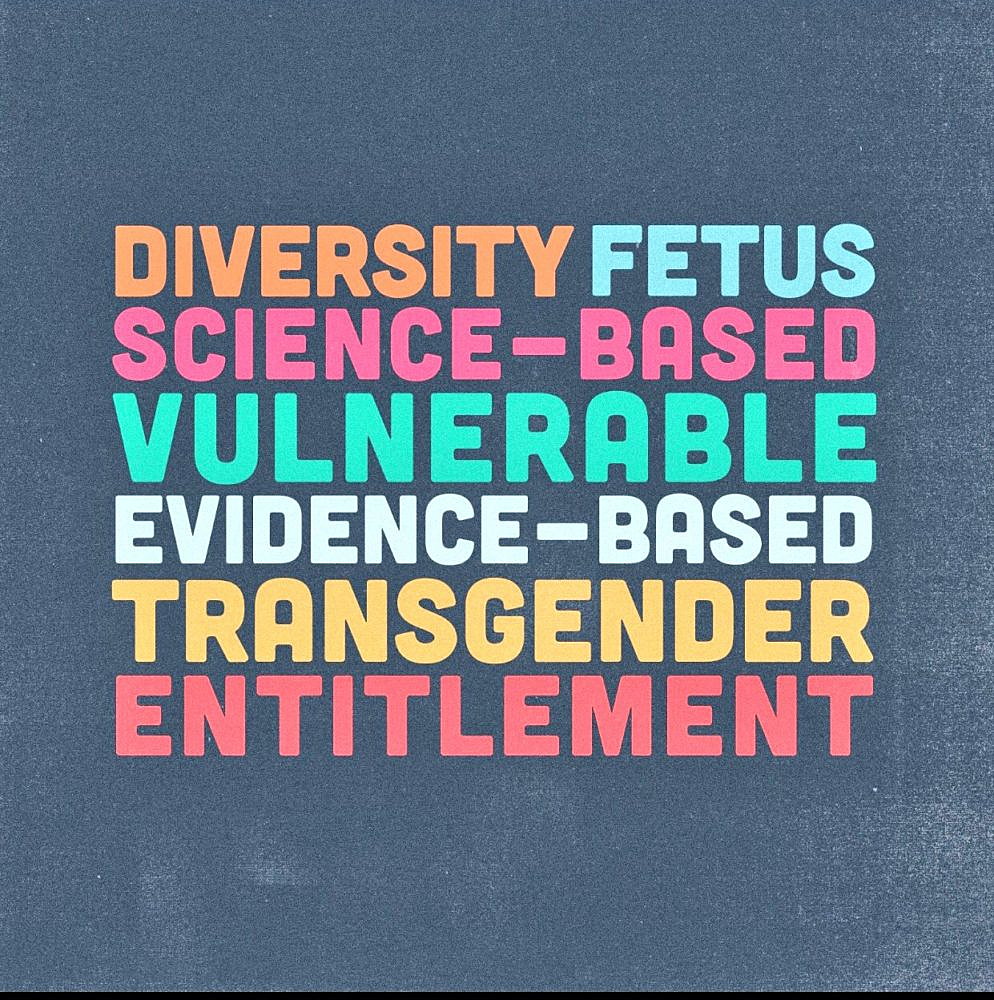 The Washington Post reported last weekend that the Trump administration has come up with a list of forbidden words and phrases that the Centers for Disease Control and Prevention will not be allowed to use in budget documents.

The list has nothing to do with George Carlin’s seven dirty words, words that I am not going to publish here gratuitously, though I do urge you to watch the entire, priceless George Carlin video.

No, the words and phrases that are going to be banned at the CDC are of an entirely different kind, though they do, coincidentally, also number seven. They are: “fetus,” “vulnerable,” “entitlement,” “diversity,” “transgender,” “evidence-based” and “science-based.”

In most cases, no guidance was given on what replacement words would be appropriate, but a substitute was offered for “science-based” or ­“evidence-based.” The suggested replacement was: “CDC bases its recommendations on science in consideration with community standards and wishes.”

This is completely understandable. Why should so-called “science” be cited as evidence when debating whether climate change is primarily caused by human activities, whether gay people can be “cured” of their misplaced longings, whether the world was created all at once several thousand years ago and whether smoking is bad for one’s health?

On these sensitive issues, community standards and the wishes of taxpaying, God-fearing Americans are much more important than listening to what “scientists” have “concluded” based on “research.” Give me a break. Though of course I have no “entitlement” to a break.

Ditto with the other words on the list. I have always had a problem with the word “vulnerable.” It’s one of those words that sets people up for failure. If you tell a child that he is vulnerable, he will probably grow up to be a snowflake, a hypersensitive crybaby or even, God forbid, a he who thinks he’s a she.

The word “fetus” obviously was invented so that we would not think of the wee creature as a human being, and since the Trump administration offered no guidance on an alternative, might I suggest “exceedingly young person” or “in-utero adolescent”?

But I wasn’t intending to go into such detail on the Trump administration’s forbidden words. I wanted, rather, to broaden the conversation, to offer up my own list of words and phrases that should be banned not just from use by government agencies, but from general discourse, as they tend to weaken the resolve of the American people or otherwise damage the moral fiber of the nation. Here goes:

♦ Fact. This one is too obvious, but the point needs to be made. If we have learned anything in the past 11 months, it is that a “fact” is as meaningless and ephemeral as a “science-based” conclusion. As an alternative I would suggest “notion,” which does away with the elitist concept of “knowledge” and carries within itself the idea of community standards and wishes.

♦ Gun. Sadly, this beautiful little word has been debased by decades of abuse at the hands of anti-freedom fanatics. By referring to guns as “Second Amendment devices,” we could re-frame the argument and put the fanatics on the defensive.

♦ Department of Defense. This abomination was devised in 1949, though the much better “War Department” sufficed for almost the first 160 years of this country’s existence. Why announce upfront that we won’t fight unless we’re slugged first? I would suggest “The Best Defense is a Good Offense Department.”

♦ Trillion. This word has basically become a scare tactic, as in discussions of the tax bill making its way through Congress. If you say something is going to add $1 trillion to the national debt, people tend to freak out. It’s just as accurate but much less alarming to say “1012 dollars.”

♦ Orwellian. Used to demonize perfectly good patriots, this word is dragged out every time sensible steps are taken to reform the language, as in the attempt to ban certain words at the CDC. Are we going to let the memory of some skinny Englishman hold us back on the march to being great again? No alternative here; just ban it.