I noticed in the Sunday paper that things have quieted down substantially at City Hall. For a while, there, it was like a cat and dog fight every day.

Well actually, it was a cat and dog fight – the cat being one Highlander (the city hall mouser) and the dog being one Rover (Commissioner Houston’s canine), to be specific. Poor young Highlander Jr. was forced to hide out in the basement.

“It was seldom that cat and dog were not engaged in a long-distance combat,” wrote a newspaper columnist, “and every once in a while the stillness would be disturbed by a hand-to-hand fight which would usually end by Commissioner Houston cuffing Rover into silence.” 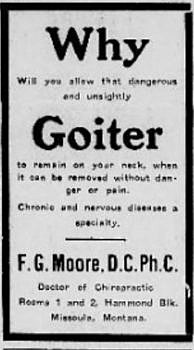 But the paper now reports our police commissioner has taken Rover to Spokane, and police headquarters is now quiet “as a morgue.”

“Why would you allow that dangerous and unsightly goiter to remain on your neck, when it can be removed without danger or pain?”

Geez – sorry about that! I changed the subject without warning.

But my eye just caught a nearby ad for Dr. F. G. Moore, a chiropractic specialist in chronic and nervous diseases. I’ll have to keep old Dr. Moore in mind should I feel some swelling.

I also see the Rev. M. L. Cook is visiting town – a guest of Mr. and Mrs. Ferdinand Kennett on East Pine Street. You remember Reverend Cook – the first pastor of the Presbyterian church, from 1877 to 1882.

Oh, sorry, again. I forgot to mention the Sunday paper I’m reading is from October 13, 1912. I probably should have mentioned that earlier. 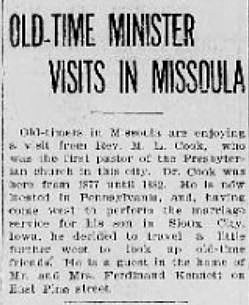 Swathmore hands Pennsylvania its first loss of the football season, 6-3. Butte High knocks off Anaconda, 14-zip, at the Columbia Gardens. The Red Sox take game four of the World Series over the New York Giants.

The newspaper’s sports columnist and poet, Tubalkane (aka T. B. Kane), even gives a few column inches to a local barfly, Jim McCann, who bet on the Giants and lost:

“He primed himself with good old rye,

Then said: ‘Twill be a slaughter;

He bet his week’s pay on New York;

He knows he hadn’t ought’er.”

All of that – but, not a word about Daddy Wilbur or his cow!

So I kicked into research mode.

It seems “Daddy Wilbur” was an older fella by the name of Roy Wilbur (who was the bookkeeper at the newspaper). He was a member of the local chapter of the Woodman club. He and his wife were involved in a music lovers group called the Sans Souci Club (named after Gertrude Sans Souci) and were often mentioned in the society columns.

Anyway, the Wilburs swapped their property in town for a small ranchette in Orchard Homes, west of town.

Roy Wilbur raised chickens, including a White Plymouth Rock rooster, described by one bird fancier as “one of the finest shaped birds he had ever seen,” and acquired a milk cow with – wait for it – no name. 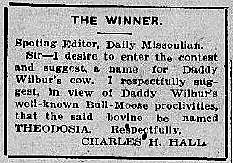 So Kane, Tubal, T. B. (whatever his name is) and a couple of other members of the Missoulian’s sports department decided to hold a contest to name “Daddy” Wilbur’s nameless cow.

What does this have to do with sports? Absolutely nothing – no connection, not even a remote one.

Another column in the paper, “Caught on the Pike About Town,” often written by Arthur L. Stone, but in this case unsigned, made reference to the contest the following day but – if anything – made it even more mysterious.

“Mr. Wilbur … applied to the sporting editor (for help) … the Wilbur family must have a name for the cow as soon as possible.”

So now the matter is not only mysterious but urgent?

Finally, a week after it began (Sunday, October 20, 1912) the winner was announced with another double-banner headline in the Missoulian: “As-it-Looks cow prize is won by Charles H. Hall; ‘Theodosia’ is the name judges inflict on Daddy Wilbur’s new dairy.”

And that, I’m afraid – a century later – is all we know. What was the urgency? Why the need to name the bovine at all? Why the sports department? Mysteries, all.

Jim Harmon is a longtime Missoula broadcaster who writes a weekly history column for the Missoula Current.