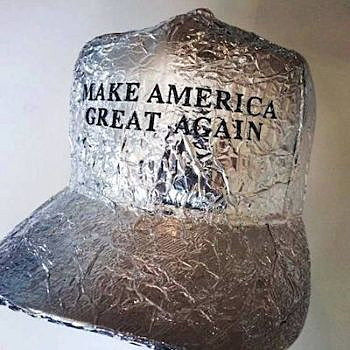 Scrolling without intent through the internet recently, I was reintroduced to “junk science.”

For the uninitiated, the term refers to “untested or unproven theories when presented as scientific fact” (Oxford) — junk parading as science without much more than a glancing familiarity with established scientific consensus.

Junk science permeates. Junk physical sciences include flat-earth theories, moon-landing conspiracies and Bermuda Triangle madness, not to mention climate change denial. Pseudo-medical sciences include faith healers, health bracelet provisioners and — among my favorites — a tin foil hat (in which headgear lined with aluminum foil shields your brain from electromagnetic fields and mind control). Psychologists contend with phrenologists (who examine the bumps on your skull for clues to your character) and conversion therapists (who cure your homosexuality).

Racial theories (that white folks are superior to other folks, or that Hindus are superior to white folks), historical theories (such as Holocaust denial), a panoply of paranormal stuff (like crop-circle investigations and levitation efforts), and religious or spiritualist beliefs (e.g., creationist cosmologies arguing that the universe is merely thousands — rather than billions — of years old). You get the point. You may even be offended.

Junk science has these cardinal features:

♦ One, it is unhinged from empirical analysis.  The scientific method, with its careful experimentations and replicabilities, is foreign to junk science.

♦ Two, it is usually driven by some head-in-clouds epiphany, although occasionally a mercenary grub-for-bucks is involved. (In a perfecta, indeed, you may have your head in the clouds while they have their hands in your pockets.)

♦ Three, it is bolstered by shelves of complicated gibberish that parishioners find mind-numbing and best left to a know-it-all priesthood.

♦ And finally, for many of our most anxious conundrums it provides simplistic answers. The Holocaust or climate change needn’t be addressed when they can be denied as a Jewish, or a Chinese, hoax. If conversion therapy really works, then homosexuals are really queer. Gotta disease? Wear this bracelet.

If you understand junk science you’ve a leg up on understanding American politics in the early 21st century. Call it junk politics. A few examples.

Tax cuts fuel economic growth. Proponents of the “Tax Cuts and Jobs Act” need you to believe this hoax. All the cardinal features of junk politics are at play here.  Empirical analysis? No reputable economist believes that “Tax Cuts and Jobs Act” will fuel growth sufficient to match its costs. Any reputable economist will warn you away from goosing a recovering economy with $1.5 trillion in additional national debt.

The driving force? Think perfecta again, in which your head is in the clouds while their hands are in your pockets. Complicated gibberish? Rep.Paul Ryan, R-Wis., is the long-serving high priest of this junk, although more recently he’s been assisted by Secretary of the Treasury Steven Mnuchin.

New York Times columnist Paul Krugman — whom Ryan and Mnuchin seldom consult — calls Ryan a “phony,” and Mnuchin recently released a one-page report claiming that the Treasury Department was claiming that tax cuts would pay for themselves. Simplistic answers? A robust American economy with more money in my pay envelope. What’s not to like? But real politics would pursue real tax reform. Junk politics plays a game in which reform is replaced by snake oil.

Climate change is a hoax. Here is another example of junk politics’ cardinal features. Note, for instance, how unhinged it is from the empirical evidence.  Scientific consensus tells us that the Earth’s climate is warming, that the warming is caused predominantly by humans, and that the impact will be disastrous. Why the hoax?  Clearly, junk is required because our engine room assumes a sustainability that doesn’t exist.

Complicated gibberish faces headwinds, what with more than 90 percent of the world’s relevant scientists moving in the other direction. Still, gibberish is available. Even, ironically, in the front office the U.S. Environmental Protection Agency, where Administrator Scott Pruitt plays fox-in-the-henhouse. And why not? If we ever needed simplistic solutions to our most anxious conundrums, it’s now.

Real politics would pursue real policies of abatement and reduction, management and mitigation. Junk politics takes its cue from junk science: climate change isn’t happening so don’t fret about it.

Social Security is an entitlement program. In the world of junk politics, “entitlement” is a code word. Ironically, it means that the recipient of a benefit isn’t entitled to it. Missing in the slur — that pesky empirical evidence again — is the simple fact that Social Security benefits are not taxpayer funded and do not contribute to the national debt. They have nothing to do with the debt because they are participant-funded.

Last year in these pages, I shared the story of Jane Doe. Together with her employers, Jane had contributed to the Social Security system from the 1950s, when she took her first part-time job as a teenager, until 2005, when she celebrated her 65th birthday and retired.  Jane did the numbers as best she could, factoring a half century of contributions together with the wonders of compound interest (rates averaged 6.9 percent during her contributing years) and the curiosities of inflation (a dollar that she contributed in 2000 is worth $1.40 today, a 1980 dollar = $3, a 1960 dollar = $8).

How does today’s value of her contribution as a worker compare to her benefits in retirement? What are the odds of good-value return on good-faith investment? Jane put it this way: “I should live so long.” Jane’s problem is that she thought of the Social Security trust fund as a sacred fiduciary, while Washington thought of it as a cookie jar.

Caught with its hand in the jar, Washington has invoked junk politics, calling Social Security an entitlement program that must be reformed. Real politics would return Jane’s good-faith investment with good-value return. Junk politics pretends that Social Security is just another entitlement, another onerous addition to the national debt.

Other examples of junk politics are thick on the ground: Voter fraud is rife.  Immigrants are terrorists. The healthcare system is broken, and the Affordable Care Act must be “repealed and replaced.” (Or – as it turns out – sabotaged.)

Like junk science, junk politics permeates. Let these few examples be salutary: junk is never politics and politics should never be junk.

Bruce A. Lohof is a native of Montana. A former professor and a retired diplomat, he lives in Vienna and in Red Lodge.