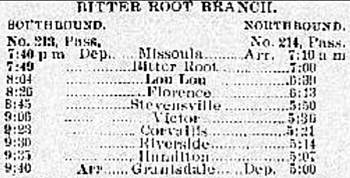 Lolo is a rapidly growing, three-stoplight community south of Missoula complete with a school awash in students, a renowned steakhouse and, in recent years, a popular brewery. Much of its population joins the daily Bitterroot commute to jobs in Missoula.

When Maggie celebrated her birthday with a dance in the early 1890s, it caused quite a stir, at least with the resident contributor to a Missoula newspaper.

“They not only danced till the ‘wee ama’ hours, but until broad daylight,” wrote the outraged community correspondent.

“When parents uphold and themselves join in such wickedness … when young girls know more obscenity than common sense … then, why, in the name of humanity, do they send all the missionaries to foreign lands?”

That must have been some party!

Mining and the lure of riches brought many early white settlers to the area. In 1873, a group called the Buckly Company sank a shaft alongside Lolo Creek, finding “gold when down 13 feet and the quantity increased as they descended.”

By the 1880s and 1890s, mining operations developed all around Lolo. One of the most notable was the “Chicaman” mine, described by a Missoulian scribbler as having tunnels of 250 to 300 feet and “a mountain of ore in sight, any of which may be worked as a profit.”

The Chicaman produced thousands of dollars’ worth of gold, although records of production have been lost to history.

But little known to most of today’s residents is the fact that Lolo wasn’t always “Lolo.”

Early on, it was called Lou Lou, Lo Lo or Loo Loo. No one seemed to agree, including mapmakers and local newspaper reporters.

In 1883, the Weekly Missoulian lobbied for a wagon road to be built to “Lou Lou” hot springs.

The New Northwest newspaper in Deer Lodge, in its coverage of the non-treaty Nez Perce movement out of Idaho into the Bitterroot Valley in 1877, referred to the “Lo Lo” trail.

As far as the United States government was concerned, the matter should have been settled in January 1888.

According to a newspaper clipping: “A petition for a post office at Lou Lou … has been sent to Washington, and it is expected that the office will be established in a few days. John F. Delancy will be the postmaster and they will spell the name the old way ‘Lo Lo.’ “

But an 1896 timetable for the Bitter Root branch railroad still listed the stop as “Lou Lou.” As late as 1914, that spelling was still being used in a newspaper account of a funeral: “The Lou Lou lodge of I. O. O. F. conducted the burial ritual of the order.”

The “Lolo” National Forest believes the name “probably evolved from ‘Lou-Lou’, a pronunciation of ‘Lawrence’, a French-Canadian fur trapper killed by a grizzly bear and buried at Grave Creek.”

Some of the most exhaustive research into the name was done by Joseph Mussulman and others who created the “Discovering Lewis and Clark” website in the 1990s. Mussulman, who passed away just a few months ago, described the research as “a careful and thorough inquiry into the history of Lolo as a place name.”

Mussulman could find no reference to “Lolo” in the Lewis and Clark journals, but discovered that David Thompson, an early trapper and trader, mentioned the name “Lolo” for the first time in 1810 – a reference to a fellow traveler.

But it wasn’t until the 1850s that a variation of the name “Lo-Lo” appeared as a place name on a map, so was there a connection?

The map was designed by Washington Territory Governor Isaac Stevens. He had hired John Mullan to explore possible railroad routes over the mountains. Mullan’s guide, Gabriel Prudhomme, is believed to have told Mullan that the creek and nearby trail used by Lewis and Clark was known by locals as the “Lo-Lo Fork” or “Lo-Lo’s Fork.”

But when Stevens drew a map of the area, he labeled the creek “Lou Lou Fork.” Some folks think it was just a typesetter’s error.

Here’s another story. John Owen, who settled in Stevensville in 1850, often noted a person named Lolo in his letters and business ledgers. This may have been an Indian who worked for one of Owen’s clerks – and that leads to a curious tale.

Mussulman wrote: “Jackson (the clerk) returned to his lodge at the close of day to discover that rascal Lolo was … very comfortably stowed away in the bed with Mrs. Jackson. She confessed that the two of them had made plans to steal some horses and elope. Mr. Jackson resigned the next morning and hit the road with his wife. Whether that Lolo hung around or took off too was not recorded.”

Could the Indian named Lolo be the namesake of the creek and town? Perhaps.

When Lolo died, his remains were said to have been buried at “Graves Creek” near Lolo. There’s a notation on an old map marking the spot.

Then-Lolo National Forest Supervisor Ralph Space, using that old map, found the site and a headstone in 1939, but by the 1960s the area was logged and the site was destroyed.

Finally, in 2003, a cadaver dog was used, the “presumed remains” were found and a historic marker was erected at the spot.

So what was the actual etymology of the town’s name? Was it “Lawrence (Lou Lou),” the fur trapper killed by a bear? Was it the Indian named “Lolo?”

Something to ponder as you have a steak dinner or a local brew at the businesses bearing that name in the small community just south of Missoula.

Jim Harmon is a longtime Missoula newsman and broadcaster who writes a weekly history column for Missoula Current.