Theater-goers in 1917 Butte and Missoula couldn’t get enough of him. 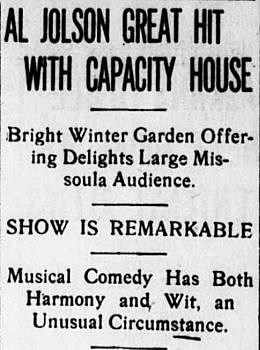 A Missoula newspaper review called him “an instantaneous hit, as frequent curtain calls and numerous personal talks to the audience proved.

“He said that he’d like to come back to Missoula, and, beyond a doubt, theater-going Missoula would be glad to welcome him again – even tonight.”

Asa Yoelson, a Lithuanian immigrant, had just turned 31 when he came to Montana. Yet, he already had nearly 20 years experience in show business, having started as a child soon after his family arrived in America.

In the next few years, Asa would cement his name as “The World’s Greatest Entertainer.” Well, not his name; his stage name – Al Jolson.

In the four years that would follow his Montana appearances, Jolson would go on to star star in New York musicals including George Gershwin’s “Sinbad,” which included the song “Swanee,” and later, in “Bombo,” where he sang “My Mammy.” Jolson’s recordings would sell millions of copies.

But in 1917, under contract with the New York Winter Garden, Jolson was just a newly minted star – not yet a superstar – and was touring the country performing in a musical comedy called “Robinson Crusoe, Jr.” in places like Butte and Missoula.

The show was characterized as “frothy entertainment made up of a mixture of music, mirth and spectacular extravaganza,” loosely based on the Robinson Crusoe book. There were some recognizable characters like Crusoe, the cannibals, and Friday, played by Jolson.

Mostly it was pure vaudeville-type entertainment. 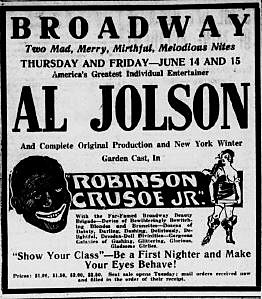 In addition to the Broadway Beauty Brigade, the huge traveling company of just over 200 included the Jockey Girls, wearing their racing caps, cravats, tight-fitting leggings and boots.

“The magnitude of the production,” wrote the Butte Daily Post, “is suggested by the fact that a carload of special effects and the advance mechanical crew arrived (a day before) and have been at work ever since preparing the stage.”

The performers and their support staff arrived the next day aboard a special train of 14 cars.

Despite the size of the troupe, the Missoulian newspaper’s reviewer made it clear “Jolson’s support (cast) was good…but Jolson was the show.”

Based on the crowd size, “it was exactly that for which Missoula had been waiting … for there was not a seat unsold – or unoccupied – last evening.”

The show had only an outline of a script. For the most part, it depended on Jolson himself guiding the audience from one bit to the next and occasionally taking time out to chat directly with the audience about “everything from dry laws to his wife.”

In addition to the advance advertising for the show itself, Montana newspapers carried another ad -this one  from Jolson’s label, Columbia Records, hyping his “latest and biggest hits.”

Those recordings included one which was featured in the 1917 touring show titled “Where Did Robinson Crusoe Go with Friday on Saturday Night?” You can click the link to hear it. 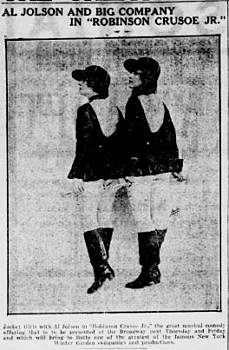 The label also bragged of its recording technology which reproduced Jolson’s voice “with the same mirror-like brilliant fidelity” as its recordings of operas and orchestras.

The Winter Garden-Robinson Crusoe 139-performance-tour was declared “one of the most successful tours in American theatrical history,” by a trade magazine.

For all his success, Jolson’s career had its rough spots. Some criticized his use of blackface as racist. Others noted his mistreatment, as a Jew, especially by Lee and Jacob Shubert, whose theatrical empire included New York’s Winter Garden.

John Kenric in his book, “Musical Theatre: A History,” pointed out that, on the one hand the Shuberts built Jolson a special runway so the star could “deliver solos right in the middle of the audience.”

On the other hand, while praising Al in public, they “subjected him to the same strong-arm tactics they used with everyone else.” Fanny Brice described it this way: “It took the Shuberts to figure out a new way to kill Jews.”

By the mid-1920s, Jolson and the Shuberts were hardly getting along. That led Jolson to hook up with Warner Brothers and a new way to reach his audience: film.

The silent-era was ending, and Jolson’s starring role as “The Jazz Singer” triggered the conversion to “talkies” at theaters across the country.

Jolson’s final tour came in 1950 – a grueling 40 shows in two weeks – performing for the troops in the Korean War.

Perhaps it was the strain of the tour – no one was sure. But, Jolson died of a heart attack just weeks after the Korean shows. He was awarded the Medal of Merit, posthumously, by Defense Secretary George Marshall.