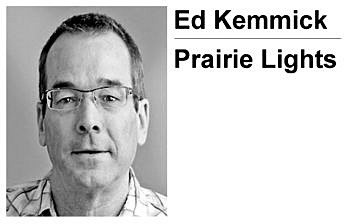 This is supposed to be the time of year we count our blessings and remind ourselves of all the good things that have happened in the past year and over the course of our lives.

But that apparently isn’t the way my brain works. I usually think, instead, of all the things that have gone wrong on Christmases past, all the illnesses and snowstorms and white-knuckle travel associated with this particular holiday.

Over the past few days, I had even more reasons than usual to dwell on such thoughts: Jessie, my daughter in Philadelphia, reported that our granddaughter, 5, had bronchitis and our grandson, 7 months, had a terrible ear infection. And my daughter herself had a sinus infection.

It brought back memories of the worst lead-up to Christmas ever. We were living in Minnesota then and were planning to fly to Missoula for the holidays. I don’t remember why, but Mrs. Kemmick flew out before me with Jessie, then 4, and I was to fly with Hayley, then about 7 months old, a few days later.

Hayley had some kind of condition then, either a bad cold or an ear infection or both. We were sitting in our plane on the tarmac at the airport outside of Minneapolis and Hayley was doing all right, even cooing a bit and endearing herself to various other passengers.

Then it was announced that the plane needed to be de-iced, which took, as I recall, almost an hour and a half. It might have been 10 minutes, though, because once Hayley began to experience some unnamable discomfort and began to cry, and then to shriek, I was no longer the best judge of the passing time.

There were some passengers, probably those with the most vivid memories of having been young parents themselves, who looked upon the two of us with some sympathy, but others shot looks our way that were not entirely kind, or in the spirit of Christmas, to put it mildly.

The shrieking eventually stopped, mostly because Hayley had worn herself out, but she was obviously suffering the whole time, and I felt so sorry for her and so bad about being unable to help her, that I was experiencing my own kind of agony.

Once we got into the airspace above Missoula, my agony reached a whole new pitch, and had nothing to do with my sympathy for Hayley. Some years earlier I had punctured an eardrum while water skiing, with the result that flying, even in a pressurized jetliner, was an awful experience.

Sometimes I experienced some pain on takeoff, but invariably I felt tremendous pain during the descent — rather like what I’d imagine it is to have a nail driven into one’s ear. And Hayley, with her own sinus problems at the time, must have been feeling something similar, because she commenced shrieking again, outdoing even her previous performance.

Worse yet, Missoula was socked in, as it is so often in the winter, and the pilot circled the valley four or five times, hoping he’d be allowed to land. He seemed to have found precisely the altitude where the pain in my ear was most unbearable, so I just sat there with my eyes slammed shut, trying various means of lessening the pain, none of them successful, while trying to hold onto Hayley, whose caterwauling was as energetic as her squirming.

Did I mention that this was back when the Hoerner Waldorf pulp mill was still going great guns? Every time we circled the valley we’d drift through the clouds of rotten-egg stench over the pulp mill, filling the plane with that nauseating odor.

Then came the announcement: The plane could not land and was being diverted to Helena, and in Helena they put us on an ancient school bus — the kind with fiberglass seats and no seat belts — to haul us to Missoula.

We finally got to Missoula long after midnight, and if my spirits were ever lower, or if I ever felt sorrier for anyone than I had been feeling for Hayley for the past five or six hours, I don’t recall it.

But here’s the amazing thing: I actually envy my daughter in Philadelphia for being with those grandchildren of mine on Christmas Day, despite the catalog of painful ailments. And at this time of year, I feel more strongly than ever that overwhelming desire to be able to go back in time, even for just a few minutes, to see my children when they were young again.

I would even go back, unhesitatingly, to that hideous flight from Minneapolis, and that awful bus ride from Helena to Missoula, just for the immeasurable pleasure of seeing one of my daughters at that age again.

It’s probably just as well that some wishes can’t be granted.