M.J. Elrod got the telegram the night of December 23, 1917. It was from the United States weather bureau.

Elrod, Missoula’s weather observer, quickly notified the local paper to warn people to prepare for a sharp drop in temperatures. The recent warm spell, “suggestive of buttercups and robins” just the day before, was about to end.

A newspaper columnist took it in stride, “Although western Montana boasts of its mild winters, it has always admitted that snow is customary on Christmas Day and that bathing is not comfortable in the river during December.”

Christmas Eve temperatures quickly plummeted as much as 30 degrees, to zero or below zero in the area. The streets were quiet; the town appeared abandoned as folks hunkered down for the night.

Many of the households were smaller than the year before, with hundreds of young men gone to serve in the “war to end all wars.”  Arthur Stone’s son Percy was among them, training at a military aeronautics school in California.

Luckily, the Stone family would soon have the best Christmas gift of all. Percy would be home shortly. His dad, a longtime newspaperman who had become dean at the university’s journalism school, waited anxiously. 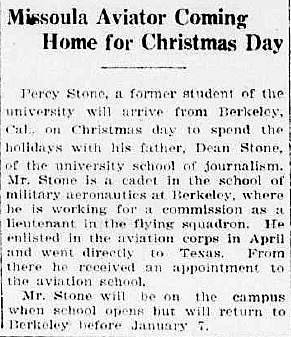 Despite the arctic blast, “hundreds of people turned brave backs upon tempting Christmas trees in the morning and marched out in the cold to church services.”

Postal workers were out, too, delivering holiday gifts. Postmaster J. W. Lister said they’d never seen so much mail stacked up at the office and planned one – maybe even two – Christmas Day deliveries citywide.

But the big event wouldn’t happen until late in the day – a huge Christmas gathering at the courthouse square. There, local Rotarians had erected a giant fir, “towering high above surrounding maple trees.”

The Electrical Workers’ Union donated the labor and materials to festoon the tree with brilliant lights and crown it with an American flag.

“Despite the threatening shadow of war,” wrote the Missoulian newspaper, “Missoula this year is breathing deeper the true spirit of Christmas than ever before. Tonight she will give utterance to the overwhelming joy of the season.”

The dean of the State University school of singing, DeLoss Smith, was engaged to lead the community in song.

When the 5 o’clock hour arrived, thousands of Missoulians braved the cold to gather around their community tree.

The program was brief – only four songs. Lyric sheets were handed out to the crowd, although most everyone knew the music: “While Shepherds Watched Their Flocks,” “It Came Upon a Midnight Clear,” “Hark! The Herald Angels Sing,” and “O Holy Night.” 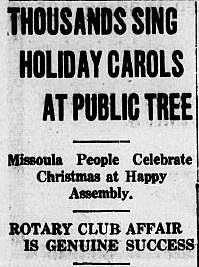 “Missoula had never, never heard singing such as that last night,” the paper recounted the next day. “Each one did his part. Nothing more was needed. The four songs were sung through and with each singing the music increased. The climax came in the last song to be used, ‘Holy Night.’

“This carol seemed to be better known and better liked by the singers. With hundreds of voices singing the words, ‘heavenly peace,’ the gathering ended.”

Peace would not come for another year.