The history books credit George Bird Grinnell for his two decades of work championing the idea as well as James J. Hill and his Great Northern Railroad for promoting the legislation.

The park was the shiny lure Hill needed to entice folks to travel west and settle in his newly-created railroad towns.

But nearly lost to history is the role of a young cowpoke, amateur boxer and singer from Fergus County by the name of Bill Pruitt.

Dubbed the Cowboy Caruso, Pruitt wowed the crowds at the Montana State Fair in Helena.

A number of leading citizens devised a plan to send the singer, along with a large contingent of other entertainers, to the 1913 Northwest Products Exposition in Minneapolis.

“The citizens of Helena,” reported Glendive’s Yellowstone Monitor, “have … the firm belief that (an) aggregation of musically inclined cowpunchers (the Montana Band), reinforced by the singing of Bill Pruitt, the ‘Cowboy Caruso’ … will result in the flocking to this state next spring and summer of thousands of home-seekers.

“They may come to hear Bill Pruitt sing ‘Bury Me Not on The Lone Prairie’ … but they will stay to see, admire and marvel, and that is what the directors of the state fair, who are in charge of the Montana exhibit, want.”

It worked. Pruitt, the Montana Band and a group of seven Blackfeet Indian dancers were such a success in Minneapolis, their backers sent them on to Chicago where they “paid a visit to all the prominent newspapers of the city,” reported the Ronan Pioneer.

The entertainers “extended a cordial invitation to them and their readers to visit Montana next summer, see the beauties of its new international playground, Glacier National Park and learn something about the opportunities awaiting new-comers on its agricultural land.”

The group of Blackfeet dancers were especially popular, followed by East Coast movie crews as they toured Chicago. The footage would be shown all over the country and in Europe, promoting travel to Montana and the new national park.

Back in Montana in the fall of 1913, Pruitt gave performances at the Imperial and Bijou theaters in Lewistown where he “delighted the large audiences with his splendid singing.”

A short time later, the local paper, the Fergus County Democrat, reported Pruitt had not only received that offer for a European tour but was getting married. “Bill is a pretty handy man, and ought to make Mrs. Bill a good hubby,” reported the paper.

“One day while here, for instance, he got tired of that swell cafe stuff and longed for real chicken. So he borrowed a gun, hiked off to the fields and came back a few hours later with his limit of fine, tender young chickens.

“He did not trust them to any chef either. He just borrowed the kitchen of another reformed cowpuncher and in half an hour or so they had a real banquet. Bill is a singer all right, but he can do more than sing. He can cook, and that’s the hallmark of a real cow- puncher.” 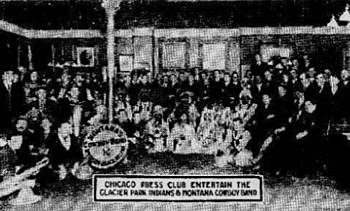 Through the 1910s and 1920s, Pruitt traveled the U. S., Europe and Australia both as a singer and as an amateur boxer.

The Battle Creek (Michigan) Enquirer called him “an honest to goodness horns and mavericks cowboy … a rootin’, tootin’, coyote of the wild untrammeled plains.

“It was while acting as chauffeur to a lot of cattle that Bill discovered he had a voice. He would lift it in voluminous paeans way out ‘thar’ to the glories of a Montana sunrise. Cattle, it seems, have a habit of arising when the first gleam of dawn breaks.

“His range is remarkable. It’s an awful temptation to say that years of riding the ‘range’ may be responsible for this, but we will desist.

“When Bill is off the stage he is an athlete, one of the champion amateur boxers of America. (While in) Australia … Pruitt annexed a trunk full of medals, loving cups and newspaper stories for the manner in which he lulled the embryo Australian boxers to sleep.”

There is no sign, no plaque to be found mentioning Bill Pruitt and the role he played in promoting tourism to the newly minted national park.

But, perhaps, on your next visit, you could look out on the Crown of the Continent and give an imaginary tip of the hat to Montana’s Cowboy Caruso.