Some say it was the explosion of a lamp. Whatever the cause, at about 6 o’clock the night of August 16, 1892, fire swept through the Blue Front saloon on West Front Street in Missoula.

“In a space of time that might be counted in seconds, the Chinese laundry to the east had caught fire, also the laundry to the west and the blacksmith shop of Dechamps & Hayes and the laundry and the Star and Crescent, the frame building just west,” reported the local paper.

Next to go was the Johnson & Daly livery stable. Then the inferno jumped the street torching a private residence, a secondhand store, a tailor shop, a pawn shop and a restaurant.

Only when it reached a brick building still under construction was it slowed. The Eddy block, the McCormick property and the Florence Hotel “seemed doomed.” 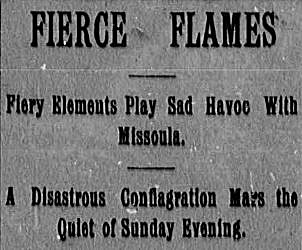 Miraculously, a sudden change in wind direction allowed firefighters to get the upper hand in the early morning hours. “Without their noble efforts,” wrote the Missoulian newspaper, “the loss would have been twenty times greater.”

While costly, the fire was not without its benefits. The buildings burned were described as “of the nature that ought to have been pulled down a year ago, as (they were) a constant menace to valuable and substantial buildings.”

The local paper declared “satisfaction in knowing that the vacant ground cannot be again encumbered with wooden shacks (and) … is now safe, barring accident, from fire for a long time to come.”

About 4 o’clock in the morning, as smoke hung over the city, 23-year-old Maurice Higgins, a member of the fire brigade and of one of the wealthiest families of Missoula, which included C. P. Higgins, the founder of the city, took a break after spending the night battling the blaze.

Another young man, Paul Goldenbogen, watched the dwindling fire, a few steps away in front of the Mascot Theater. Both were about to become part of “one of the saddest tragedies in the history of Missoula.”

Goldenbogen, who had earlier witnessed a man steal some items from a local store, observed the man again and confronted him. Words were exchanged and the thief, later identified as a drifter named John Burns, pulled a revolver and shot Goldenbogen in the left arm.

“Goldenbogen staggered from the shot and reeled toward the group (including Higgins), when Burns shot again, the bullet missing Paul and striking Maurice Higgins in the center of the forehead,” said a newspaper account.

Higgins was rushed to his family residence, Goldenbogen to the Sisters Hospital, both with what appeared to be mortal wounds.

Sheriff Houston quickly apprehended the drifter, who was identified as the shooter by Goldenbogen from his hospital bed.

“The people of Missoula are much worked up over the affair, and there was this morning considerable talk about lynching the murderer, but that feeling has quieted down and the law will be allowed to take its course.”

Maurice Higgins’ brother, George, left that morning for Victoria, B.C., to bring their mother back to Missoula to see “her favorite son.” But at 3:30 that afternoon, young Maurice Higgins died. 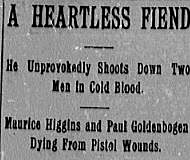 A month later, the trial commenced before a packed courtroom. The judge repeatedly ordered the sheriff to make the spectators get back behind the railing and sit down.

The defendant, on the other hand, was cool and collected.

The key witness, Paul Goldenbogen (still recovering from his gunshot wound and extremely weak) was brought in on a stretcher and placed within inches of the jury, so his “labored and painfully spoken words” could be heard.

He, as well as another witness, identified John Burns as the killer. The defense, however, called it a case of “mistaken identity” asserting the defendant had been on West Front Street at a house of prostitution when the crime occurred.

Oddly, though, Burns couldn’t recall exactly which house of ill-repute or other pertinent details of his story.

When the jury proclaimed Burns guilty of murder, he remained as before, “unmoved … (without) any expression of his face.”

Even at his execution the night of December 16, 1892, “as the sheriff slipped the rope over his head and adjusted it,” he looked at Father Guild who stood at his side and at the boys “perched on trees nearby” to watch the event, and smiled.

When asked if he had any final words, John Burns replied, “No. Let her go.”

This story from more than a century ago is still replayed today as part of Dr. Bob Brown’s characterization of Christopher P. Higgins, performed at “Stories in Stones,” and other events.