Overdue for a visit to the dentist? A bit fearful, perhaps?

History is on your side; dentistry can be scary.

Sumerians, 9,000 years ago, believed “tooth worms” caused decay, according to the American Dental Education Association, and the theory wasn’t disproven until the 18th century, when “modern” dentistry evolved!

In the early days of Montana Territory, the practice of dentistry was rather crude. There were few trained dentists and the X-ray and other basic modern tools were unknown. Medical doctors or barbers often pulled offending teeth.

An article in the Daily Yellowstone Journal described an early dental tool called a “turnkey” or “hawks bill” used to extract teeth. It was “turned so as to seize upon any tooth (and) then by a twisting motion the offending molar was rolled out.”

The writer recalled “the first artificial which I ever saw” made from “ivory or cattle’s teeth and sometimes secured in wood (or) metal posts (forced) into the stump of a decayed tooth.”

The country’s first dental college was established in Baltimore in 1840. Despite that, in the following three or four decades, just about anyone could hang up a shingle in the territories, proclaiming himself a “dentist.” 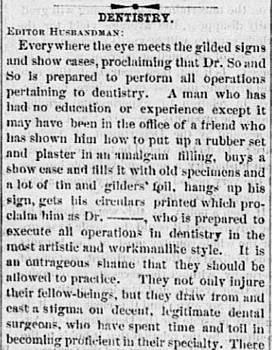 One of the few trained dental surgeons in Montana wrote to the Rocky Mountain Husbandman newspaper in 1877 calling it “an outrageous shame that they (untrained dentists) should be allowed to practice.

“They not only injure their fellow human beings, but they draw from and cast a stigma on decent, legitimate dental surgeons, who have spent the time and toil in becoming proficient in their specialty.”

He called for the establishment of a state examining board.

One of Montana’s pioneering dental surgeons, Dr. J. A. Nichols, was based in Virginia City but traveled extensively to the region’s mining camps in the 1860s, “at the solicitations of persons desiring dental operations,” according to the Montana Post.

By the 1890s, dentistry was much improved. The Neihart Herald declared Dr. Clarence J. B. Stevens’ practice in Great Falls as “one of the finest dental parlors to be found in the northwest.” The building on Central Avenue was adorned with a large “gold tooth” sign.

The paper reported Stevens along with his partner run “three chairs, night or day work, give gas, or vitalized air, and use local anesthetics in the extraction of teeth, but by treatment save nearly all teeth or roots, utilizing them to great advantage.”

The practice was “equipped with all the modern appliances used in dentistry,” including both water-powered and electric lathes, and occupied “six rooms, the whole front of the Ford block.”

As for the future of dentistry, the Helena Independent accurately predicted in 1890 that, given the rapid advancements in dental knowledge and modern appliances, “natural teeth will last a lifetime if properly attended to,” though its accompanying prediction on “transplant(ing) them when desired,” was a bit off the mark.

Today, we have laser technologies, digital X-rays and intra-oral cameras, plus anesthetics that make for a pain-free experience (the most important advancement for us, the squeamish patients).

My fear of dentists began early in life with a practitioner, in the 1950s, who believed no anesthetics were needed for minor cavities. He just drilled away and expected the patients (even children) to tough it out.

But later in life, my fears (while never banished) were lessened considerably through an interesting set of circumstances.

I dated, then married a dental assistant. As a result, I’ve been seeing a dentist as often as three or four times a year for a number of decades. My oral health is great.