On Feb. 24, 1905, a brand new newspaper in a soon-to-be brand new county in western Montana published its first edition.

Publisher J. T. Spencer proudly predicted, “We expect to see Sanders County one of the most prosperous counties in the state,” citing its many resources.

“We have a large agricultural area, one of the largest timber belts in western Montana, and … the largest deposit of antimony in the world.”

Then there’s the weather: “Our growing season commences at least two weeks earlier than the Bitter Root valley, and our winters are shorter. The blizzards which sweep the eastern part of the state and extend as far west as Missoula are unknown here.”

Folks in the area had long wanted to break away from Missoula County and run their own affairs in Thompson Falls, Plains and other nearby communities. So they petitioned the state Legislature to allow them to form a new county, proposing to call it “Paradise.”

Paradise it might have been but for one “civic-minded individual” who reminded the lawmakers that they had earlier agreed to name new counties after “the greats of Montana.”

So the name Paradise was dropped in favor of “Sanders” – honoring Colonel Sanders. No, not the finger-lickin’ chicken guy (he was only 14 years old in 1905), but Wilbur Fiske Sanders.

Montana’s “Colonel Sanders” started life in rural New York and as a young adult moved to Ohio, where he was a teacher, then a lawyer. He was never actually a “colonel,” but was commissioned a first lieutenant during the Civil War.

Family ties brought him to Montana. His uncle, who helped him study law in Ohio and later made him a partner in his law firm, had moved west. That uncle was Sidney Edgerton, Montana’s first territorial governor.

Sanders arrived in the territory at the height of the vigilante movement. He became the prosecutor who sent George Ives and others to the gallows.

Within a decade, he helped create the Montana Historical Society and became a member of the Territorial Legislature. By the early 1890s, he was elected to the U.S. Senate. So he certainly made his mark as one of the “greats of Montana.”

“We doubt very much if a more appropriate or a more popular name could have been secured for the new county,” wrote the Sanders County Ledger, “than the one which was suggested at the eleventh hour and incorporated into the bill that will give this section a new county government, beginning the first Monday in March, 1906.”

The Ledger praised Sanders for his work in the 1860s: “When the balance between the roughs and the better element stood wavering on the poise, he threw the weight of his eloquence on the side of law and order.

“As the godfather of Sanders county, the Ledger takes off its cap in salutation and voices the wish that the doughty old war horse will live to see the day when Sanders County will be recognized as a symbol of all that goes to make up the progressiveness and prosperity of the true sons and daughters of the west who have cast their lots in western Montana.” 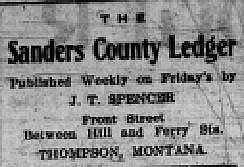 Now, said the Ledger, “his name will be handed down in history, as the name of one of Montana’s fairest counties will ever be a graceful and fitting monument to one who has loved Montana since his boyhood.”

In the following week’s issue, the Ledger reported it had received a letter from the colonel thanking the paper for its editorial, but adding little else saying, “the letter is entirely a personal one (so) we are compelled to forego the pleasure it would afford to give it to our readers.”

As was customary in the day, other Montana newspapers weighed in on the launch of the new journal. The Billings Gazette called the Ledger “a neat six-column country weekly.” The Great Falls Leader labeled it “bright and newsy.”

The cross-county competitor, the Plainsman, predicted the Ledger would “find it hard work to keep from using red ink in its books,” but hoped “the undeveloped resources of Sanders County may yet allow us all to wear diamonds if we live long enough.”

The Missoula Journal was considerably less diplomatic. “The paper is the product of the Missoulian of this city, edited and printed from that office, but carrying the name of J. T. Spencer, a former employee of that paper as publisher.

“The Ledger, so rumor has it, was started for the ostensible purpose of knocking the Plainsman out of the county printing, the graft in Missoula County not being sufficient to satisfy the greed and appetite of the management of the Missoulian.”

Other than that, it wished the Ledger well.

Just kidding. The Journal actually predicted, “In all probability, the attempt will die a bornin’ as it should.”

Rough business, journalism, at the turn of the century.