Libby, Montana is a special place – a wonderful town with a colorful history and colorful characters.

Full disclosure: I am a third-generation Libby native and former “logger” – literally (as a choker-setter in the woods in the early 1960s) and as a Libby High School Logger – facts that both inform and influence my view of the small northwestern Montana community.

In recent decades, Libby’s population has gone through health and public relations hell after revelations of asbestos-related issues stemming from the old vermiculite mine near Rainy creek.

It’s disheartening to do a Google search of “Libby” only to see endless negative articles about the town. On the other hand, it’s encouraging to see the work being done by John Blodgett, Mark Peck and others to tell Libby’s story.

But this column is about history. So on with today’s story – the early days.

From time immemorial, the Indian tribe roamed the region. A local stream (Pipe Creek) is said to be named after the colorful stones found there, used by Natives to create pipe bowls.

White traders like David Thompson were among the first to “discover” the area in the early part of the 19th century. Many explorers followed.

In 1859, a party of 10 men, including a naturalist “expected to be appointed by the Smithsonian Institution and a literary gentleman as traveler and author set out to explore “the region of the Kootenais Indians,” according to the Washington, D. C., Evening Star newspaper.

But it was the discovery gold in the 1860s that would trigger the influx of miners, whose names would be given to local landmarks and eventually the town: John S. Fisher (Fisher River), Stephen Allen (Libby Creek, named after his daughter Libby, short for Elizabeth) and Bragg Parmenter (Parmenter Creek).

One of the fascinating stories to come out of early days Libby was recorded in the September 28, 1867 issue of the Montana Post in Virginia City.

The “New Mines” were described as being at the mouth of Libby Creek, “eight miles up the Fisher river” from the “Big Bend of the Kootenai River.

“The first (gold) discovery was made by Joe Heron, ____ Allen, ____ Moore, Anthony Cavanaugh and four or five others.”

Some time later, they trekked to Missoula Mills, 200 miles away, for supplies. On their return, they split into two parties with some of the men cutting across country to scope out other possible sites while the remainder, including Joe Heron and Anthony Cavanaugh, headed straight for their newly discovered “Elderado,” with their pack animals and supplies.

When they reached the Big Bend, they were “joined by a band of Indians who professed to be friendly and assisted the miners in crossing the river on rafts. 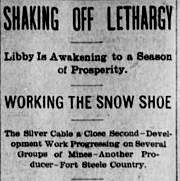 “The next morning while Joe Heron was tightening the last rope on the animals, he was fired at by one of the Indians, and cried to his comrades to run, but too late – his three friends were fired at and fell dead.”

The attackers rode off with the pack team, apparently believing Heron was dead. The wounded man spent the next 23 days “barehanded, barefooted and coat-less … more dead than alive” dragging himself back to the mine site.

His friends, upon hearing his account, rushed to the site of the massacre, “but found only the remains of two (of the victims) partially devoured by wild beasts and birds. Not the least trace of Cavanaugh could be found.”

Since those first gold discoveries in the Kootenai region, the Montana Post told its readers, “hundreds have rushed to Libby … (where) the gulch is reported to be forty miles long, the gold to be fine, resembling Alder Gulch dust.”

As with many tales of gold discoveries, it was hard to tell fact from fiction back in the day.

A correspondent for the newspaper later reported that others returning from Libby were calling the so-called discoveries, “in unqualified terms … the biggest ‘bilk’ of the country.”

The writer concluded, “Now, as both statements are given, let every one judge for himself, go or stay, and lay no blame to (me).”

History proved it was no “bilk.” There was gold, silver and other precious metals to be found in a number of drainages in the area.

In 1887, the Philipsburg Mail reported, “A number of Cour d’Alene miners stamped to the Libby Creek placers in Montana (with) notices … forbidding lawyers to come into the camp.”

Over the years, one of the largest discoveries was the Snowshoe lode on Leigh Creek. It reportedly produced over a $1 million worth of ore.

With all the discoveries, transportation routes were needed. In the late 1880s, “efforts (were made) to cut a trail between Thompson Falls and Libby Creek,” but heavy snows often blocked the route. When that happened, prices on existing supplies spiked in the Libby camps. “Flour … is $9 per hundred pounds and everything else in proportion.”

By the early 20th century, the lodes dwindled to unprofitabilty and, one by one, the mines closed.

But there remains that dream. To this day, a few locals still enjoy prospecting in the area – looking for their new “Elderado.”