As you drive down Railroad Street in Missoula, you encounter a bit of the city’s past: two blocks of brick pavement, set in place more than a century ago.

It’s a story of heated debate, a lawsuit, a notorious madame rejected, a matter of second choices and a man named Bert Nelson.

It was the summer of 1912. The streets of Missoula (Higgins, Front and Railroad) were finally to be paved. But brick was far from the first choice; in fact, it was the last choice.

Property holders, who would foot the bill, met in January of that year. The debate was described by the Missoulian as “three hours or more of heated discussion and more or less acrimonious debate.”

When it came time to cast ballots for their first and second choices of materials, bitulithic pavement (asphalt) led as the “first choice,” followed by wood block.

Something called “Hassam” concrete, used in Coeur d’Alene the previous year, came in third and brick was dead last. But none of the first choices garnered a majority. 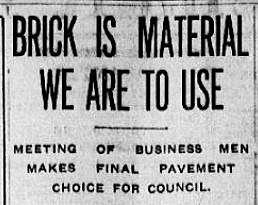 Brick, however, was overwhelmingly the “second choice” of most of the businessmen. When “the relative strengths (of) first and second choices (were combined), all but brick and bitulithic were eliminated in the primary.”

On the second ballot, brick narrowly edged out asphalt as the material to be used, and the city council prepared to solicit bids for the project.

But as you might have guessed, nothing about this process was going to be easy.

A local company, the Standard Lime & Brick company, backed by the infamous Front Street madame Mary Gleim, was among the bidders and sentiment was running high for using local brick.

The whole city council and a number of others went out to the plant where Standard’s Supervisor, C. P. Garrison, showed off the latest product from the kiln and put it through “rattler and absorption tests.”

But still, there were questions of whether the local company could mass produce high-quality brick and meet the tight deadline to finish the paving in the coming summer season. 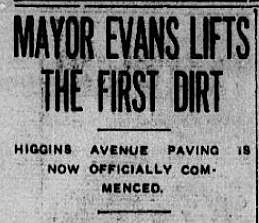 In the end, the city awarded the paving work to the George Dietrich company and the brick contract to the Denny-Renton Clay and Coal Co., both of Seattle.

But before the job could begin, local businessman O. C. England petitioned the court for a restraining order, “attack(ing) the validity of both the paving district and the council’s proceedings.”

Judge Webster quickly ruled against England and on April 25, 1912, Missoula Mayor Evans, Mayor-elect Rhoades and Contractor Dietrich shoveled the first dirt at the intersection of Higgins and Front, commencing the project.

In the coming weeks, the focus of attention turned to a bricklayer named Bert Nelson.

Nelson was the “main attraction … the cynosure of all eyes,” and he drew huge crowds as he worked.

So many people ditched work to watch the bricklayer, his supervisor estimated the dollars lost in productivity to Missoula businesses would have “more than (paid) the total cost of the work.” 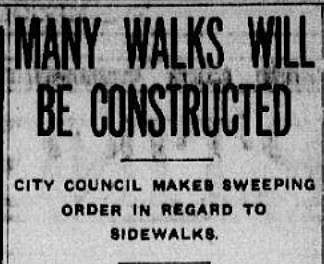 With the exception of a few defective bricks that needed to be replaced, by September the job was done. But it was just part of a record year of municipal improvements.

The council ordered six miles’ worth of boardwalks removed and replaced with concrete sidewalks. Cedar Street (now Broadway) was paved with creosoted wood blocks, other streets and alleys were paved with either asphalt or concrete, and new lights were placed along Higgins Avenue.

By the end of 1912, the various improvement districts had spent over $258,000 (nearly $6.4 million in today’s dollars) with few complaints from the public or the press, given the massive disruption it must have created in the downtown area.

Perhaps today’s leaders could take a page from history and make sure they have an “attraction” the likes of bricklayer Bert Nelson on some of this summer’s jobs. But then, that might be quite a blow to business productivity.