In search of a subject for this week’s column, I’ve become distracted – again. Apparently, it’s in my DNA.

Every time it happens, I find myself both delighted and frustrated. Over time, I’ve learned to just give in – to go with the flow, and not fight it.

Here’s the way it works: I find an item of interest in an old newspaper, but instead of clipping it and moving on to find more on the subject, I notice something else in an adjoining column – some shiny, distracting object – then another, and another until I’ve totally lost sight of the goal.

First, it’s a small item about a fundraising effort in Butte.

It’s 1917, and some young ladies have raised $700 to benefit French orphans. It’s called a “tag day” event. The story says, “Seven thousand tags were disposed of by the 35 young ladies who did the pinning and incidentally collected a dime in each case.”

Curious, I researched tag day. It’s “a day on which contributions are solicited … and small tags are given in return.” Actually, they could be anything from paper tags to fancy ribbons. 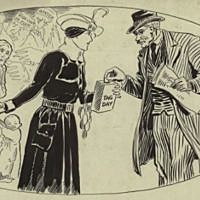 Specifically, tag day was associated with war-related fundraising for the Red Cross, Salvation Army and other organizations.

By 1918, businesses helped with advertising the tag day efforts while helping themselves. “Today is Red Cross tag day,” read one ad, “an excellent thing to remember and so is the new Edison, the phonograph with a soul.”

I must have spent an hour and a half reading about tag day.

Then there was a story about pea canning season in the Bitterroot Valley. I had no idea that peas were a big crop in the area – certainly not so big that a cannery would be built!

“A fine crop of peas is now pouring into the Bitter Root cannery, which is located at Bass Spur and a big output is being made,” according to the Missoulian newspaper. Eighteen thousand cans of peas “were sealed” in just two days in mid-July of 1917. Who knew?

A few columns over, I noticed that arrangements were being made for a Chautauqua in Red Lodge, with a program “far superior to anything similar ever presented in Carbon County.”

Today’s generation likely has no idea what a Chautauqua is. I remember my mother telling stories of attending fascinating Chautauquas during her summer breaks while going to normal school in Billings. The five-day traveling tent shows brought educational lectures and entertainment to rural America. Perhaps I’ll do a piece on that soon – or what a “normal school” was.

But then, my attention was shanghaied by a nearby advertisement. “John L. Sullivan, the ex-pugilist, says that more people die from over-eating than from drink!”

The main story on this particular newspaper page was advice for farmers “who are in too great a hurry” to put up hay properly.

“The proper way to cure alfalfa, red clover or any other legume hays is to rake the swathe almost as soon as it is cut (and) let the hay lie in the winrows for several hours.”

Then, it advises, “cock it up and let it finish its curing process in the cock. This allows the hay to dry more slowly than it would were it exposed in the fields to the direct rays of the sun.”

All this advice about the drying effects of the sun makes a fella want a nice cold cup of ice cream, so I’d better head over to the Herrick company. They’ve just installed a new “Progress Bruin ice cream machine” that can turn out 40 gallons of ice cream an hour!

Well, there you have it – a glimpse into the easily distracted mind of your aging author.

Frustrating, yes. But delightful in that a single page of a single newspaper from a century ago gives me endless fodder for future articles: Chautauquas, pea canneries or turn-of-the-century developments in manufacturing and agriculture.

Who knows what next week will bring!