The history of Stevensville reaches back to 1841, making it “Montana’s oldest community.”

If you haven’t visited recently, you’ll find a lot has changed. But, then – it’s always been changing.

One of Montana’s early journalists discovered that back in 1911, penning an article about his experience.

Arthur L. Stone was a chemist and high school teacher who began his journalism career in 1891 working for the Anaconda Standard (a Marcus Daly paper).

In the early 1900s, he became managing editor of the Daily Missoulian before eventually being asked to establish a journalism school at UM (then, MSU).

“I have been over an old trail this week,” wrote Stone, “a trail which I used to traverse often, but which, for one reason and another, I have neglected for several years. I enjoyed it so much that I think I shall renew my old habit of visiting Stevensville frequently.

“There are many more orchards (and) grain fields and there are scores of new farm houses, comfortably placed along the road,” he noted on the train ride up the valley.

Arriving at the Stevensville stop on the Northern Pacific Bitter Root line, Stone boarded the local stage for the short trip into town, noting the new “steel and concrete bridge” which had replaced the “old rickety structure that once struck terror to the heart of the tenderfoot.”

Nearing the community, “the fact becomes apparent that the old town has entered upon a new era.” Stone noted all the residential growth, including the impressive new McLaughlin home “with its pretty lawn, its fine orchard, its model garden and its concrete walks and curbing.”

Following supper, and taking time to watch a baseball game, he wandered the streets of town enjoying “the fragrance of lilacs and roses (and) the evening concert of larks and robins.”

Then it was off to the town hall where the Chamber of Commerce was having a “lively discussion” of local matters. But it was the social aspect of the meeting that impressed Stone.

“The coffee was real coffee and the sandwiches were plentiful and good. The pickles were great and the good cheer was splendid.”

Then there was the entertainment – music and singing – “liven(ing) the program so effectively,” Stone wondered, “if some of the long-distance members would get home in time to milk the next morning – or, rather, that same morning.”

Stone was up early the following morning to catch the return train. He described his sunrise walk before breakfast as so delightful “as to beggar description.”

Along that walk, he encountered “a man leading a beautiful Jersey cow” down a grassy trail. Engaging the man in conversation, Stone learned the fellow took his “fine cow” on a morning walk each day, apparently his way of thanking the bovine for providing the family with all the milk and butter they needed, and then some. 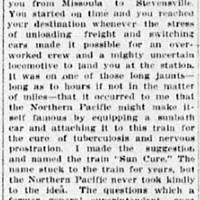 “The spell of the morning was so strong that it compelled even the man with the cow to say, ‘It’s a fine day, ain’t it?’

“Stevensville’s farewell was as happy as had been its greeting. I came home over an old trail, filled with the happiness of a delightful visit and with a spell of that incomparable summer morning yet upon and about me.”

Stevensville continues to evolve and change.

There’s another relatively new bridge across the river, this one with a separate bike and walking path. Many of the businesses contained in the historical downtown buildings have changed; others have been there for years.

Most remarkably, the number of dining choices is astonishing, beyond disproportionate for its population. Marie’s Italian restaurant has been celebrated for generations. Others (Morning Star, Catered Table, Mission Bistro) are relatively new.

If you haven’t followed the old trail to Stevensville in years, you (like Arthur Stone, more than a hundred years ago) are likely to be surprised and delighted.

There’s no guarantee you’ll have a sunrise conversation with a man walking a Jersey cow – but, maybe.