These are exciting times.

NASA is about to launch TESS(Transiting Exoplanet Survey Satellite), to be followed in a couple of years by the James Webb Space Telescope, which will look at “distant worlds around other stars, and probe the mysterious structures and origins of our universe and our place in it.”

We’ve long dreamed of life on distant planets and of communicating with our celestial neighbors.

In 1892, the Helena Independent remarked, “When one thinks of the modern inventions of communication, such as the telegraph and the telephone, the man who predicts a successful result of the experiments is not to be put down as a fool or a crank at this time.

“If, however, the inhabitants of other worlds can be communicated with by signal, it may certainly be expected that actual communication may result, and that we will, in the course of time, receive visits from our neighbors over on the moon, or Mars, and open up a new field for the conquering of new worlds.”

The Glasgow Courier, in 1919, supposed, “It is entirely possible that other planets have had inter communication for centuries, and that we are still in the beginners’ class. 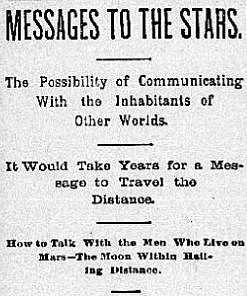 A. Young, writing for the Helena Independent in 1891, suggested that if Martians were to paint “upon some great plain” … “letters not less than fifty or a hundred miles in height and width” we might be able to read them through giant telescopes.

Young admitted there might be a language barrier. “Of course, if the language of the Martians is not the same as one of ours the method would fail.”

But there are other means of communication.

A Detroit Sun report, carried by Montana newspapers in 1892, told of a telegraph operator who had taken a relay box home to see if he could repair it. The box, unconnected to any wire, “in as clear and perfect Morse as I ever heard, wrote, ‘Do you get me?’ ”

The frightened fellow verbally answered “yes” without keying the instrument, which then responded, in Morse Code, “Thank God, at last!” What followed was a detailed message of the man’s death and his wish that the telegrapher contact his parents and inform them of his passing.

In her 1921 book, “To Women from Meslom,” McEvilly detailed her ability to record “messages from the great beyond, the invisible world.” Specifically, she claimed to have communicated with a 15thcentury monk (Meslom) with her psychic powers.

An expert with the American Society for Psychical Research, Dr. Walter Franklin Prince, reacted to the book by saying, “I do not know who ‘Meslom’ is, or that he is, but I do know that Miss McEvilly has both in the connection with others and with my own experiments given evidence of intelligence other than her own, and acting through her brain and hand.”

Now, for just 25 cents one could get straight to the heart of the matter by attending Theosophy Priestess Annie Eva Fay’s presentation at the Butte Opera House on Sunday night, June 18, 1893.

Her High Priestess-ness believed life simply jumps from planet to planet through reincarnation.

Did I mention that she was also planning a trip to India to acquire a carved, wooden head “received from the hand of the adepts,” and to “make it speak?”

In a scientific variation of that theory, Professor Otto Klotz, writing in the Royal Astronomical Society of Canada journal in 1911, proposed that life on Earth arrived “from some other part of the universe by light pressure” and that “we, in turn, may contribute (to) the beginning of life on some world unknown to us” through that same process.

None of this may matter, though, according to a 1900 article in the Butte Inter Mountain newspaper, as we will soon find ourselves plunged into cosmic darkness.

It seems Norwegian professors Barkendal and Mohn had calculated that the sun will redden and darken in as little as 5,000 years. “Then our earth will die (and) after that comes the night of ages.”