It was “a brilliant social event” and “one of the most important of the season,” according to the society writer for the Western Democrat newspaper.

Miss Alice Reeves was to be introduced to Missoula society.

It was the gilded age – 1893. Members of the “upper crust” of Missoula were determined to show that that their fine city had the social graces, the savior faire of their Eastern kin.

“The handsome Reeves residence in South Missoula was thrown open for the first time, and this fact, together with interest attending the debut, was the signal for a large attendance.

“The arriving guests were ushered into a scene where music, flowers and handsome toilets were elements of a beautiful whole.” 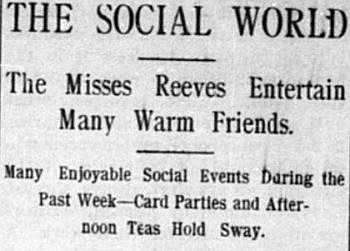 “The fair debutante was charmingly gowned,” and was assisted in welcoming guests by “a number of pretty young ladies.”

As was common in the 19thand early 20thcentury, the entertainment included a “delightful repast” of “sweet morsels and all the delicacies of the season,” followed by music and dancing to a late hour.

But the affair opened with a game of Whist. The card game was all the rage back at the turn of the century. It involved exacting rules governing not only how the game was to be played but also to the etiquette of players.

Books were written on the subject; the most likely one used in this period was one written under the nom de plume “Cavendish.”

Also noted in this particular society column were the secretive “parlor theatricals in rehearsal by the Bioda Club.” 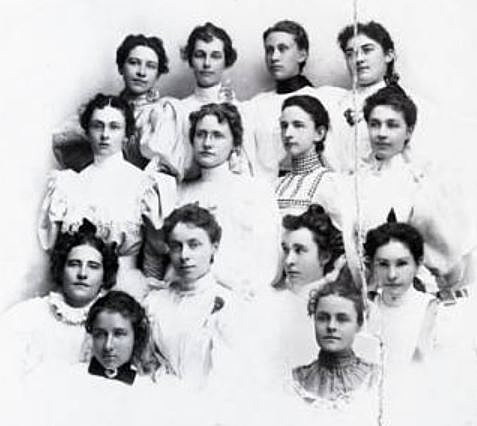 The Bioda Club, a young women’s group formed in the fall of 1893, was described by a society writer for the Anaconda Standard as being “composed of the wealth, beauty and talent of the Garden City.”

One of the first “entertainments” given by the club was staged at “the palatial Bonner residence in South Missoula in December of ‘93. The society “editress” of Missoula’s Western Democrat was invited to observe in order to ensure maximum, front-page news coverage.

The “editress” did not disappoint, characterizing the evening as “one of the swellest events of the season,” to which only “ladies prominently identified with Garden City social circles” were invited.

“The club presented two charming comedies,” about which the columnist gushed, “The bevy of society girls … acquitted themselves creditably (and) the splendid manner in which each character was handled, demonstrated a most careful selection as to the adaptability of the artiste.”

The following night, the Biodas broke from tradition and invited a few prominent young men to a repeat performance at the Florence Hotel.

“The music was furnished by the Ladies Kazoo orchestra under the direction of Miss Fannie Robinson, who wielded a huge cheese knife as a baton,” wrote the correspondent for the Anaconda Standard. 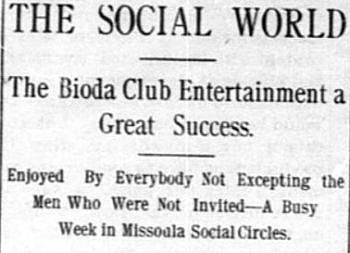 The only hitch in the performance came during a campfire scene involving a peace pipe. The young ladies were not familiar with “the art of smoking,” and one of them “became visibly affected, necessitating a rapid descent of the curtain.”

Nonetheless, the Standard writer complimented the performers, hoping they would offer more such fare, but added they “should be more generous with (their) invitations.”

The club continued for some years, with references in western Montana journals as late as 1902, but then disappeared from society columns.

What a time it must have been.

I can’t seem to get that image out of my mind: Fannie Robinson with a long cheese knife leading the kazoo band.