for ma has some carpet to beat.

She’s got all the furniture out in the yard

from the front porch clear down to the street.

Spring cleaning in Montana – celebrated in poetic form, with “My Tale of Woe” – on the front page of the Neihart Herald in 1893.

Yes, it’s time to clean the windows and toss out all the collections of winter. But the spring ritual doesn’t make news like it did in the past.

Missoula Postmaster Hank Myers was reported to have been “repainting, renovating and otherwise improving his Front Street residence,” according to a local paper in 1894.

Even my grandfather garnered some ink in the Libby newspaper when he put a new coat of paint on the house in 1934.

But the spring ritual had much more serious roots than personal or civic pride in the appearance of the community; it was a matter of life or death.

Missoula’s Board of Health ordered Marshal E. A. Kenney to clean up the town after two cases of diphtheria, one fatal, were reported at Sisters’ Hospital in 1887.

The first order of business was to get rid of the “hog pen owned by the Chinaman near the Sisters” and to clean up the “filth and debris on the bank of the river on lower Front Street.” 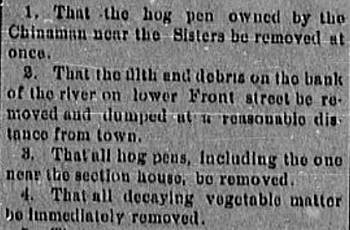 Doctors in Dillon, while noting “little sickness,” still asked that the locals “prospect backyards and prepare for the spring cleanups.”

Meantime the Billings Herald, proclaiming in 1883 that people could no longer “shut their eyes and hold their noses,” backed the local Board of Trade in demanding that “this thing must stop.” This “thing,” being waste thrown “into the streets or any other handy place.”

The matter, wrote the Herald, “can be put off no longer … to (do so) is to endanger the health of the community.”

It published the warning “as a last note of warning to those who have heretofore neglected their spring cleanup” in hopes “it will not be found necessary to resort to legal proceedings to compel them to do that which for their own sake, and the sake of their fellow citizens, they should have done so long ago.”

Similarly, in Miles City, the Yellowstone Journal complained in 1887 that it had seen no sign of anyone “cleaning up backyards, ash heaps and offensive substances which may breed disease,” and urged residents to do so before being forced by the county commissioners.

Back in Missoula, the sheriff and the county janitor busied themselves tidying up the courthouse yard and fixing that pesky gate, something “thoroughly appreciated by a long-suffering public,” according to the Anaconda Standard. 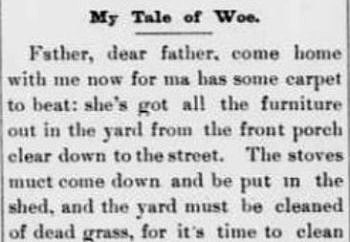 “For years there had been incessant grumbling over the old latches on these gates,” wrote the paper, “and they have caused unnumbered bruised fingers and untold profanity.”

All this talk of spring cleaning caused the Sentinel newspaper (reprinted in the New Northwest, Deer Lodge) to wonder in 1877 if a man could invent “some way by which a fellow can take out his liver in the spring, hang it in the backyard, and whip it, as they do carpets.”

That, conjured the paper, would “confer a boon” on mankind.

Happy spring cleaning – liver, and all.