“Are there no prisons? And, the Union workhouses; are they still in operation?”

That was Ebeneezer Scrooge rebuffing a request for a charitable donation in Charles Dickens’ 1843 classic, “A Christmas Carol.”

Just like 19th century England, America had its “poor houses” and “pest houses” too, commonplace in the era before nursing homes, Social Security, Medicare and Medicaid.

In the 1880s, as Missoula’s population exploded with the arrival of the railroad, the citizenry realized it was no longer practical for the sheriff to deal with the growing number of transients, indigents and those with smallpox and other communicable diseases.

So the concerned “upper crust” demanded that the county commissioners “find a place to house them so as not to deflect from Missoula’s quality of life.”

On March 6, 1888, the commissioners considered proposals “for grounds on which to establish a poor farm,” choosing “a tract of 40 acres at $40 per acre,” offered by H. C. Hollenbeck. 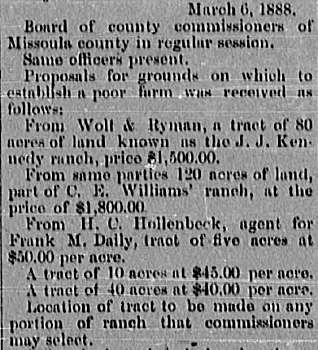 Initially, they built housing for the poor and, a decade later, added another facility in which to quarantine those with contagious diseases.

All this was funded by the county’s “poor tax.” Among the initial withdrawals from the fund were $1,570.40 for Sister Mary Louise to run the facility, $54 for the care of a child named Ira and $7 for firewood supplied to the pest house by J. W. Greenough.

The “inmates,” as they were called back then, usually suffered from any number of problems (physical or emotional) in addition to being indigent. If they were able to work, they did chores on the farm in exchange for three squares a day, shelter and medical care.

The “pest house,” built in 1897 over the protests of Rattlesnake Valley residents, had thick brick walls and iron bars or shutters on windows. If “inmates” had any family in Missoula, relatives were allowed to leave food or other necessities outside the door.

There were no screens on the windows; the flies, filth and stench were infamous.

When a pest house resident died – and that was what they were sent there to do – they were buried on site. Rooms were then quickly disinfected in preparation for the next residents.

It’s estimated hundreds, perhaps as many as a thousand people were buried on the grounds now occupied by Rattlesnake School.

According to research by Bonnie Flanagan in 1987, a second pest house was built in 1899 as well as “other small houses … where people with contagious diseases would go to be quarantined.”

The Missoula County Detention Hospital (which became Pineview Hospital) was built on the property in 1908, with additions in 1926 and 1933. The poor farm building burned to the ground in 1936 and was never rebuilt. Over the years, locals just began referring to the whole complex, hospital and all, as “Pineview.”

Part of Flanagan’s research revealed what it was like for Pineview employees during the Depression years.

“Lucille Klapwyk was a cook at the poor farm,” wrote Flanagan. “The day started at about 6 a.m., with the cooking of a full breakfast, and ended about 8 p.m. after dinner cleanup. Cooks fixed three meals a day for about 40 old men (only occasionally was there a women patient). It was a hard job and lifting all the supplies needed to feed that many people was strenuous.”

In 1947, after a public outcry over the conditions at Pineview, the county commissioners asked a registered nurse by the name of Marie McNeilly to take over. She was appalled.

In an interview 30 years later with Missoulian staff writer Steve Smith, McNeilly recalled arriving there on a cold spring day in ‘47 in the company of Commissioner O. B. Parsons. “We started to go into the hospital together, (but) he couldn’t stand the odor … pushed me in and closed the door and took off for better places!”

In a follow-up book, “Pineview: Nurse Marie McNeilly, Pineview Hospital, and Missoula’s elderly poor,” Smith quoted McNeilly as saying, “I was frozen in my tracks when I got my first look inside Pineview Hospital … there just didn’t seem to be any place to start. The filth was just unbelievable. The patients hadn’t been cleaned and the beds were wet — they had been for a long time.”

Despite the efforts of McNeilly and many others, Pineview’s days were numbered.

School District No. 1 bought five acres of the poor farm land in 1957 to build Rattlesnake School. In 1963 – citing increasing operational costs and Pineview’s state of disrepair – the county commissioners ordered the last of the patients to be taken to other nursing homes.

Finally, in 1970, more than 80 years after their predecessors paid H. C. Hollenbeck $1,200 for those original 40 acres, the county commissioners ordered the Pineview Hospital building torn down, ending an infamous chapter in Missoula history.