Hiji is the name of a small town of less than 30,000 people on the southernmost Japanese island of Kyushu. It’s the home of “Harmonyland theme park.”

Hiji is also the term for an elbow blow in the art of karate.

None of this is of any particular help in explaining why the name Hiji was given to members of a fun-seeking secret society in Missoula formed in the early 1890s.

The group was officially named Monarch Moslem, No. 196, Sons of the Mystic Tie, and was created on April 5, 1891 as an “association of gentlemen banded for the diffusion of benevolence, charity and good will to all.”

Although their genesis is elusive, the group was likely patterned after a Masonic offshoot, The Mystic Order of Veiled Prophets of the Enchanted Realm (M.O.V.P.E.R.), formed in New York in 1889 for the purpose of “lively social relations, sometimes mischievous but never mean.”

The Hijis (or Hyjis) did love to party and play practical jokes. They also liked to change the name of their secret society whenever the mood suited.

Their annual event was a Grand Ball Masque at which members and guests were costumed as kings, queens and knights – even as “clowns and buffoons.”

If a newspaper clipping about one such event is to be believed, as many as 2,000 attended the 1893 masquerade ball held at Missoula’s Knights of Pythias Hall.

Count me as a non-believer. 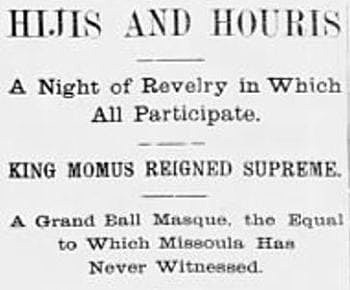 The Missoulian newspaper, an apparent willing co-conspirator in the whole charade, described the event (just two years after the group was organized) as “the eighty-second annual ball of the Moslem Mosque No. 196, Royal and Universal Order of Mystic Hijis. What happened to the ‘Sons of the Mystic Tie?

“Safe in the sense of disguise, hilarity was probably freer than witnessed at conventional socials, but the abandon was not of that character which even the prude would object to.

“One little plump and painted beauty, bubbling over with wit, flesh and good humor, clad in an expensive gown more plentiful in train than bodice, and with an attitude of toe that would be quite amazing even at a French ball, was pronounced the belle of the evening.”

The reporter went on to describe another participant, a “handsome creature,” as wearing “most of her costume on her head, her body enveloped in a filmy fold of gauzy texture, suggestive of a warm night and stifling atmosphere.”

But practical jokes and pranks most defined the character of the Hiji brotherhood.

As midnight approached one evening, “some hundred or more members of this mystic band” marched to the home of their “organizer” who had just consummated “his marriage to an estimable lady,” and escorted the fellow to the Florence Hotel “where the act of settin’ ‘em up at the expense of the groom was indulged in.”

After considerable time, during which “soda water and other corks were kept flying in the air,” the man thanked his fellow Hijis and appealed to them “to escort me hence to the spot from whence I came.”

Then, there was the time the Hijis were reported to have appropriated the body of a murderer, who had just been hanged – placing his embalmed body, upright in a downtown building. A note attached to the corpse proclaimed, “I am a Hiji and I am preparing for the Montana statue.” 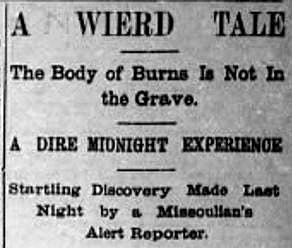 The story, printed on the front page of The Morning Missoulian, was referenced a few days later in the Populistnewspaper: “If what we have been told is to be believed, there is more truth than josh in that little story.”

Keep in mind, the members of this “secret society” are prominent members of Missoula society, including George and Frank Higgins and Doctors Ellis and Hanson.

Perhaps the crowning achievement (?) of the mischievous group was the elaborate theft of a Christmas turkey. In fact, it was that story, on the front page of a newspaper – the very first microfilmed journal I explored nearly a decade ago, that sparked my interest in the lives of ordinary people in early Montana.

But it was the prank that also led to the group’s downfall.

The Anaconda Standard newspaper reported, “The members of that mysterious order, the Hyjis, who were once proud of their organization, are today trying to disown membership in the lodge.”

I’ll retell that story – “The Great Turkey Heist” – next week.