He was a “progressive Republican … a member of the Masonic Lodge … (and) one of the wealthiest men in Missoula,” largely through real estate deals in partnership with the likes of C.P. Higgins and T.L. Greenough.

But he is remembered most as a lawman – twice elected sheriff – who “hanged five men, shot one on the street, and sent more than one hundred men over the road to the penitentiary for different crimes.”

William H. Houston, an Indiana native with little education, rode shotgun on a stagecoach as a young man and later became a brakeman, then a conductor for the railroad, finding his way to Missoula in 1883.

He bought the Grand Central Hotel, operating it for a couple of years before returning to railroad work.

In 1889, at age 36, he was elected sheriff of Missoula County, making a name for himself chasing train robbers and hanging murderers, including John Burns, the man who killed Maurice Higgins.

Burns’ body – if you believe some newspaper accounts – disappeared, only to be found propped up in a downtown building – the alleged work of a group of local pranksters, the Hijis.

But within months, citizens began to question a lack of law enforcement. They hired a private investigator who found “vice, gambling and bootlegging abounded in Missoula.”

A mass meeting was held at a local church and a civic betterment committee was appointed. The committee asked the state attorney general and others to investigate, resulting in a series of raids to stop liquor and gambling violations.

Armed with dozens of witnesses, Attorney General Wellington Rankin officially charged Houston with multiple failures to enforce the law, including tipping off bootleggers of pending raids, collecting protection money and, according to the Great Falls Tribune, “inducing witnesses … to leave town and to testify falsely.” 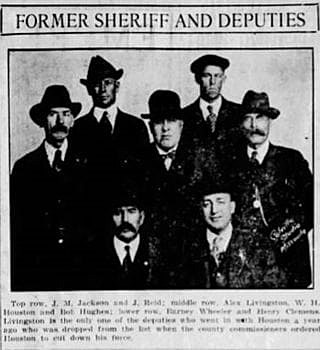 Houston was temporarily removed from office pending a trial. But when the jury found him not guilty, he was reinstated as sheriff.

Rankin wasn’t done. If he couldn’t get Houston on prohibition-related charges, he’d get him on gambling law enforcement issues.

Houston’s attorneys used “every means of which they (could) think to prevent or at least delay the (case) in district court,” reported the Missoulian. Repeatedly, the Houston team moved to disqualify proposed judges.

Finally, though, the state supreme court ruled Judge C. W. Pomeroy of Kalispell would hear the case on whether to oust the sheriff from office. The hearing was set for December 1921.

Both sides attacked the veracity of the other’s witnesses while admitting their own may have fibbed here and there. 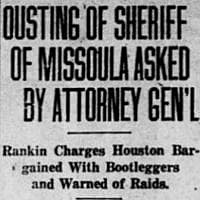 Defense attorney Mulroney, too, said it would probably be a stretch to ask the court to believe “angelic wings were about to sprout” on his witnesses.

So it came down to who was lying, or lying the least.

In the end, the judge declared the prosecution had failed to prove its case regarding prohibition violations, including the collection of protection money. But he sustained the gambling-related counts and ordered Houston removed from office. County commissioners quickly appointed Undersheriff George Cole to fill out the term.

The final showdown would come a year later. Both Cole and Houston filed for the office.

Cole ran on his record. The Missoulian praised Cole’s crackdown on moonshiners, pointing to the destruction of 24 stills and making more than 30 arrests in a single raid.

Houston reminded voters he’d been acquitted by a jury, only to be tossed from office by an “unfair and prejudiced judge” and he promised to perform the duties of sheriff “faithfully and conscientiously.”

When the ballots were counted, the Missoulian summed it up succinctly: “(Houston) was after vindication at the hands of the voters. He didn’t get it.”  Cole won by hundreds of votes.

Great lawman and entrepreneur? Or conniving racketeer, lining his pockets with protection money?

It is possible William H. “Bill” Houston was all of the above.