What follows is the account of a petty larceny – a story which would have been lost to history, but for the fact that the Evening Missoulian documented every aspect of the case – much of it on its front pages.

Why the newspaper did so is a mystery, but I strongly suspect that the paper’s editor at the time, Lambert Molinelli, “a prominent member of … the Knights of Pythias,” not only knew every member of the group involved in the heist, but (who knows) could have been part of their “society,” the Monarch Mosque No. 196, Sons of the Mystic Tie, aka the “Hijis.”

The Hijis were a brotherhood of pranksters and practical jokers among the elite of the community.

Missoulians, picking up their papers the evening of January 2, 1894, read the following front-page account of the Great Turkey Heist of 1893:

“Once upon a time there resided in Missoula, happy and fat, and totally oblivious to the dangers which surrounded him, a gentleman turkey, of the dressed value of $2. 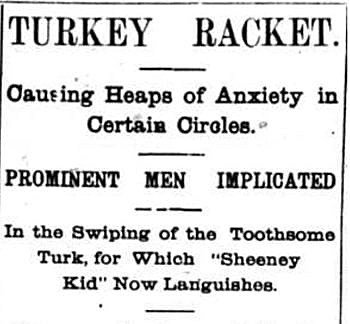 “Christmas came, as it does but once a year, and that turkey was selected to bring good cheer to the stomachs of some Missoulians. The turkey eventually fell to the lot of Charles H. Skinner, who resides at the Hammond block and who placed it on the window sill outside of his room that it might be kept fresh until the proper time should come to prepare it for the table, and there is where its job-lot of trouble commenced.

“On Christmas night, shortly after the electric lights had begun to throw their yellowish glare around the corner of Higgins avenue and Front street, that turkey disappeared: was “swiped” in fact, and Mr. Skinner waxed exceeding wroth thereat.”

So began the day-by-day coverage of the great turkey heist, which would carry on for the better part of a month.

A local bar-fly, Abe Cohen, known as the “Sheeney Kid,” was promptly arrested for the theft, but “influential friends” rescued him from jail, promising Mr. Skinner they’d pay for the turkey and for his trouble.

The trouble is, they didn’t pay up – so, Skinner had the “Kid” re-arrested, and brought before a city judge. Skinner told Judge Evans those who offered to pay for his silence included two prominent Missoula doctors, Parsons and Hanson.

The “Kid” admitted that he and a man named George Earl had swiped the bird, but only at the direction of Doctors Parsons and Hanson and some others. The judge ordered the Kid to be held in jail under $200 bond and issued a warrant for Earl.

Earl’s trial was set for the following night – and given the press coverage – the courtroom was packed. “Every seat in the body of the house was taken, some holding portions of two and even three interested spectators, the gallery was crowded almost to suffocation, while even the press reserve on top of his honor’s strong box was encroached upon by ordinary mortals.”

The trial was a farce. Witnesses testified George Earl was involved, but the jury took only minutes to declare him “not guilty.” Judge Evans, clearly exasperated, issued arrest warrants for Dr. W. B. Parsons, Dr. H. H. Hanson and Smith Davis for petty larceny.

Doc Parsons, indignant that his name be bandied about in “sidewalk twaddle,” declared in a letter to the editor of the paper, “I had nothing to do with taking or eating the so-called goose (or paying for) hushing up the matter.” 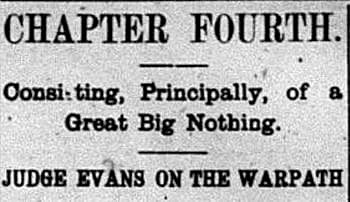 Their court appearance drew “the very cream of Missoula’s male society,” including “a number of gentlemen who have been directly and indirectly tangled up with” similar poultry pranks in the community, but have escaped “having their antics paraded in a police court in full view of a vulgar public.”

The two doctors stood before Judge Evans, while Smith Davis hid “behind City Treasurer Curran’s pen rack,” a wise move given the fury of the judge, who immediately declared the two doctors in contempt of court, fining each $10.

It seems that “Drs. Parsons and Hanson had sworn out a complaint (with a local Justice of the Peace) … charging Judge Evans with bribery, (creating) a common rumor on the streets yesterday that a warrant had been issued for Judge Evans’ arrest” in an attempt to “bulldoze” the turkey case. Evans declared “such preposterous conduct in his court would not be tolerated for an instant.”

Still the defendants won the day, convincing the judge that Dr. Parsons actually had nothing to do with the turkey stealing (his case was dropped), and arguing they could not get a fair trial before Judge Evans had the case transferred to Judge Donley’s court.

The courtroom was packed; 30 witnesses were called. County Attorney Denny “made a most eloquent appeal for justice, (showing) plainly that the testimony unquestionably compromised the defendants.”

The defense simply asked that the case be dismissed, “alleging all sorts of things that had no bearing on the case.” 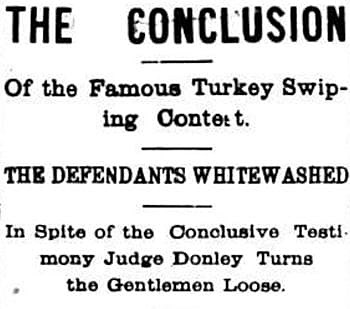 But inexplicably, Judge Donley, “with his eyes averted from the gaze of every man in the room, almost inaudibly murmured that he could see no evidence to warrant a conviction and dismissed the defendants.”

The prosecution was indignant. The Missoulian declared a “weak-kneed judiciary (had) succeeded in defeating the ends of justice” and the taxpayers were out a sum “sufficient to set the think pot of the average citizen working in a violent manner.” In the end, only the lowly Abe Cohen, aka the Sheeney Kid, paid a price by serving jail time.

The case, while a monumental miscarriage of justice, was pivotal in the public shaming and slow demise of the Hijis.

They claimed to be indigent, failed to pay rent and were kicked out of the K of P lodge. They garnered some press now and then, including an attempt to enter local politics with a “Hiji ticket” in 1900, but within in a few years disappeared altogether.