What’s your vision of the best Fourth of July celebration ever? Parades? Barbecues? Fireworks?

Montanans have been crafting that vision since territorial days.

In Virginia City in 1865, Waugh’s Band led the early morning parade of carriages and horsemen through the streets of town, then over to Nevada City and back.

That afternoon, they erected a stand at Creighton’s Corner, with “covered seats provided for the ladies.” The afternoon was filled with notable orators, including Thomas Dimsdale and W.F. Sanders. The grand fireman’s ball lasted well into the night.

In 1869, the streets and saloons of Deer Lodge were packed with mine workers, farmers and locals. It was a day of speeches, horse races and fireworks. James H. Mills, editor of the New Northwest newspaper, reported that despite the heavy partying, there was “neither an instance of drunkenness, brawl or ill-nature … to disturb the joviality, good fellowship and sport of the midsummer holiday.”

The celebration in Bannack in 1873 was somewhat subdued. The correspondent for the Helena Independent reported “no rattling of artillery music was indulged in, owing to the critical condition of a lady in town.”

Still, “the usual amount of fluids necessary to produce a flowing of patriotic sentiment was moderately partaken of.” Said fluids also spurred one gentleman to attempt “a balloon ascension with a cotton umbrella.” He failed in his attempt, owing to the fact that he had just “eaten a whole roast pig.”

In 1874, townspeople were shaken from their night’s rest at sunrise by a “howitzer salute from Tower Hill, the pealing of church bells, and national airs from the Helena cornet band.”

Over in Deer Lodge that same day, a crowd estimated to be “the largest we have seen in the Territory,” gathered in Court Square to hear speakers, including W.A. Clark and one of the leading lawyers of the day, Thomas L. Napton. 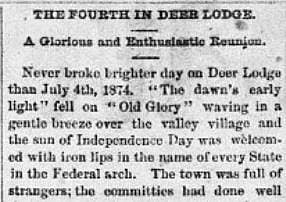 The New Northwest newspaper reported “not one in a hundred of his audience had seen him until that day,” but they would not soon forget him.

“For sixty minutes he held them as in a spell and the applause that greeted fine sentiment and well-rounded periods was stifled quickly lest an utterance be lost,” reported the paper.

“In theme, in treatment and in diction the address was superb; and the fervid manner of the speaker, his clear, deep, resonant voice cultured to perfect utterance, added the higher charm of eloquence to thoughts well worthy of the day and deed commemorated.

There has been but one sentiment expressed in relation to it – universal approval and satisfaction.”

Were I to pick a favorite Fourth of July celebration in Montana history, I’d have to give the nod to Gallatin County in 1874.

“Bozeman was depopulated, and only a dog or straggling swine could be seen on the streets. Every vehicle, horse, mule and ass was brought into requisition for transportation purposes,” reported the local paper, the Avant Courier.

That may have been a bit of a stretch, but the Fourth of July celebration at Central Park was “spoken of as the best turnout and most glorious celebration ever had in the valley.”

It was the 98thanniversary of the country’s independence, and the Gallatin County Grangers (the Order of Patrons of Husbandry) put together a “pic-nic” to celebrate. 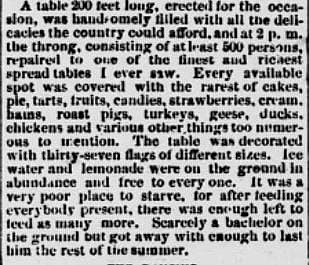 The Grange was a groundbreaking fraternal organization that brought together families to fight for the well-being of agriculture, with women and working-age children as important parts of the group.

At sunrise, “a large cannon, taken from Bozeman for the occasion and commanded by J. C. Switzler Sr., broke the stillness and woke from slumber the quiet neighborhood.”

That was followed throughout the day with cannon blasts to salute every state in the Union as well as every speaker at the day’s ceremonies and every piece the band played. Remember, this is 1874 – before modern headache medicines.

Anyway, by 11 a.m., there was a huge crowd gathered at the park along “the east bank of West Gallatin river, near Ceckrill’s bridge, in a delightful grove of gigantic cottonwood trees.”

A 4-foot-high platform, large enough to accommodate speakers, a band and a choir, had been decorated with flags and banners.

And there was food.

One of the Grangers described it this way: “A table 200 feet long, erected for the occasion, was handsomely filled with all the delicacies the country could afford, and at 2 p.m. the throng, consisting of at least 500 persons, repaired to one of the finest and richest spread tables I ever saw.

“Every available spot was covered with the rarest of cakes, pies, tarts, fruits, candies, strawberries, cream, hams, roast pigs, turkeys, geese, ducks, chickens and various other things too numerous to mention. Ice water and lemonade were on the ground in abundance and free to everyone.”

In short, he said, “it was a very poor place to starve.”

Oh, to have been there.