Harmon’s Histories: Saddle up for a merry ride with the Polson Cowboy Band

It was called Polson Market Day – the first one held on Saturday, April 30, 1910. If successful, the town would stage one each month.

Everyone was invited to bring items they wanted to sell and an auctioneer would put them on the block – horses, pigs, cows, buggies, household goods, anything. Merchants did the same.

The Carey Blacksmith Shop offered to “give a 10 percent discount on all grain beds.” Shur Brothers said they’d “shoe four of your horse’s feet at the cost of three.” And Flathead County State Bank promised to “give each depositor, large and small, a fine Morocco leather checkbook holder.”

A week before the inaugural event, the town’s newly minted local paper, the Flathead Courier, suggested “some amusement will be furnished, either a band, a ball game or a big Kootenai war dance.”

It turned out to be a group of 12 musicians, each a professional player at some point in his life in “some of the best bands in the country,” coming together to form the Polson Band 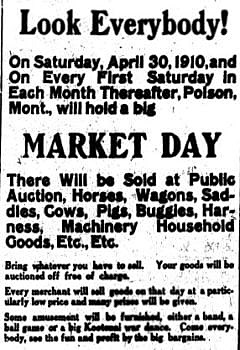 The newspaper was ecstatic, reporting there would be four singers backed by clarinets, cornets, a trombone and a couple of drums – and each of the musicians “owns his own instrument!”

The paper urged locals to turn out and give the new band their “cordial support.” After all, a “town without a band is like a ship without a rudder.”

The crowd loved them. They not only played for the event, but “also serenaded the principal places of business” in the evening.

In a matter of months, the band had become the main attraction at local events. On the Fourth of July, they performed a concert at the waterfront, then led a parade from the docks to the fairgrounds. As many as 5,000 people turned out.

In the coming years, the group, now 30 strong and renamed the Polson Cowboy Band, played at events all over the region, promoting the city by the lake, declaring “Polson Does Things!”

At the Missoula Stampede, the band proved so popular they were held over for the entire event. After daytime performances, they would hop into a number of cars and roam about Missoula – “making themselves heard.”

The Garden City newspapers, according to the Courier, gave the band great reviews, winning “a home in the hearts of Stampede crowds and (making) a lasting impression of the Power City’s enterprise.” 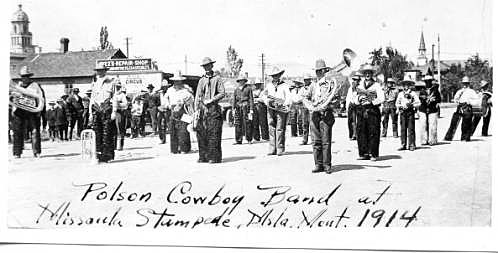 The singers and musicians were even hosted at a luncheon sponsored by the Missoula Mercantile.

Later, Professor Marion Riffo, the band’s director, told Missoula news reporters they would not only be back to perform at the Stampede again, but they would be bringing the entire town!

The boisterous Riffo said, “We’re coming down by the hundreds and you’ll know it when we arrive.” A 50-car caravan was being organized. So many Polson residents plan to come to the Stampede, he continued, that “those who don’t come will feel pretty lonesome.”

By the next summer event, the Cowboy Band was boasting there would be “nearly 100 automobiles” for their “impressive entry at the northern end of the city,” with “six-shooters, horns, bells, megaphones … a pet mule and a grizzly pup.”

When the band arrived, one press account said the city was “at once plunged into the merrymaking which was continued … until late at night.” 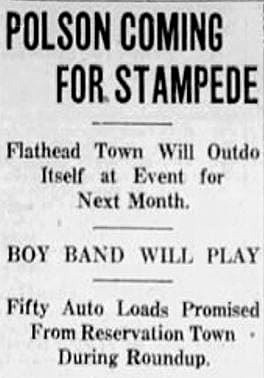 In the next few years, though, financial support for the band diminished and the group folded. In 1922, the Flathead Courier reported, “A few practices were held this winter but with no money with which to purchase new music and no backing the interest lagged.”

But the Polson Cowboy Band did eventually reinvent itself, performing at local events including the Polson Harvest Festival. It peaked again in the mid-1930s.

In 1934, a Junior Cowboy Band was formed and in 1935, as part of the $15,000 Polson dock and breakwater project, the Missoulian reported “a pavilion will be built for the accommodation of the Polson Cowboy Band and their outdoor band concerts.”

After that, press reports about the band (except for numerous “look back” stories about its heyday in the early 1900s) stopped – nothing to be found.

But what a group it must have been.