It’s been an unusual year, weather-wise. But summer may finally have arrived.

So far, we’ve used the central air-conditioning only a few times at our small abode, but whenever we do it brings back a flood of memories.

I recall my grandmother, tired of the stifling heat one summer, buying a thing called a swamp cooler. You had to add water to it constantly, and it only seemed effective within a two-foot span, but it was wonderful.

I also recall the evening, decades later, when I came home for a dinner break (before returning for the 10 o’clock TV news). The heat was so overwhelming, I was forced to eat dinner in my car with the A/C running. Then and there, the decision was made: Call the HVAC people.

To this day, I sing the praises of Benjamin Franklin and Willis Carrier.

On June 17, 1758, Franklin wrote a letter to a colleague outlining his study of evaporative cooling. “From this experiment,” wrote Franklin, “one may see the possibility of freezing a man to death on a warm summer’s day.”

But it wouldn’t be until 1902 that Willis Carrier developed a practical way to use the idea by designing a machine to blow air over cold coils to not only cool the air, but also “condition” it by reducing humidity as well.

By the 1920s and 1930s, hundreds of American businesses were using this new technology to “make weather to order.” In 1933, Missoula Sheet Metal Works invited folks to come in and “see it in operation at 122 West Main.”

Railroads, faced with growing competition from airplane and bus transportation, added air-conditioning to entice travelers. Newspaper columnist H. I. Phillips mused, “Air conditioning became the rage, and the discovery that it was possible to take a deep breath inside an American railroad train and live gave travel an immediate boost.”

Physicians began to see the benefit of air-conditioning for patients suffering from asthma and hay fever. The Vatican saw a different benefit: preserving ancient documents. There, they installed “two types of electric air conditioning devices … one drying air in summer and the other moistening it in winter.”

But it wasn’t until the post-war era that the use of air-conditioning (and everything else electrical) took off in America.

In 1949, the owners of the brand new Fox Theater in Missoula assured their patrons that they would be “kept comfortably warm in the winter months, and cool throughout the summer, with one of the finest air-conditioning systems available.”

The system’s sophisticated controls would, they said, “automatically prevent air from entering the auditorium either too hot or too cold,” as well as adjusting when the audience size increased or decreased.

H&S Refrigeration of Dillon advertised the new Frigidaire room air-conditioner for only $331.90 cash, or 10 percent down with payments. “Say goodbye to heat, dirt and noise,” said the ad in the Dillon Daily Tribune. “It needs no plumbing, uses no water. Just plug it in.” 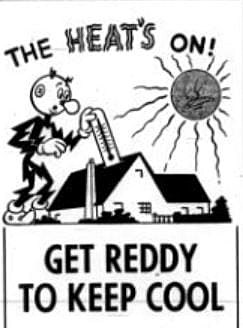 The president of the Montana Power Company, J. E. Corette, said demand for electricity had nearly doubled in the decade after the war, given the popularity of new appliances and “the rapid expansion of home air-conditioning.”

Company mascot “Reddy Kilowatt” (remember him?) urged customers to get on board: “Get Reddy to keep cool. It’s goodbye to hot, humid misery when Reddy walks in with the crisp, cool refreshment of an electric air-conditioning system or an electric fan.”

Interestingly, in 1957 MPC customers paid a “new all-time low average of 2.15 cents per kWh for residential electricity,” less than half the cost 20 years earlier.

As the temperatures head into the 90s and beyond in the coming weeks, join me in raising a tall cool one to toast Ol’ Ben and Willy, “Thanks for the best summer invention, ever!”