In August 1931, most Missoula high school students were enjoying time off with their friends. A couple of them, though, began spending hours at the public library preparing for the coming debate season on the question of unemployment insurance.

Busy, too, was one their teachers, Miss Winifred Muckler, who was wrapping up study and exams for a master’s degree in education at the university.

Workers were finishing a $200,000 addition to Missoula County High School (now, Hellgate High). Three hundred new lockers were being installed, furniture and bookcases were being moved into the building and 1,300 new seats were being fastened to the gymnasium floor.

Superintendent Ira B. Fee welcomed the roughly 1,200 high school students when classes began on Tuesday, Sept. 8, 1931. The teens liked the new digs, especially the lockers. They’d been sharing – two to a locker. Now each had his or her own.

Not everything was perfect, though. At about 11 on the night of Sept. 14th, janitors Felix Boileau and Lewis Johnson, ready to clean the library and the classroom above it, found they couldn’t turn on the lights – the switches didn’t work. 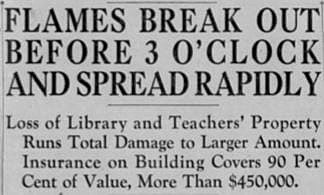 A few hours later – about 2:30 a.m. – Bert Matthews, a college student living at the Sigma Phi Epsilon house on Gerald Avenue, was awakened when the lights in the darkened rooms of the high school flashed on. He also thought he saw a haze hanging above the north wing of the building.

He went outside to investigate, but couldn’t see anything. When he returned to his rooftop sleeping porch, however, he saw the haze again. He woke a roommate and the two went to check it out. As they approached the high school, the lights again flashed on in a couple of rooms of the building.

At the same time, Patrolman Kohn of the Missoula Police Department, passing by, called in the alarm: The newly-renovated Missoula County High School building was on fire.

“When the first firemen arrived, reported the Daily Missoulian, “flames were pouring from windows and part of the roof on the west comer of the north wing. In less than an hour, the fire had swept through the upper floor through the hallway and reached the new wing, getting into the magnificent new auditorium first.”

Every piece of fire equipment and every firefighter and volunteer available was pressed into action, but within a couple of hours the whole complex was ablaze and it was clear little or nothing would be saved.

Fire Chief James Cranney told reporters, “We never had a chance. When we arrived, the flames were bursting through the roof and racing along the top floor.” 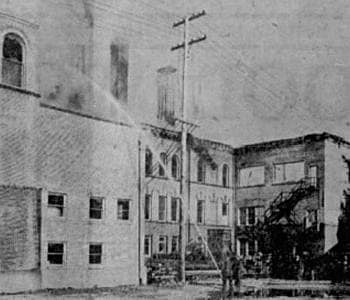 One firefighter, James Russ, had to be carried out of the burning building by fellow firefighters. He was hit by a falling girder. A young on-looker, 14-year-old Ted Garlington, was also injured – hit in the head by a falling piece of cornice as he was walking behind the building.

Students, arriving for school that morning, saw the destruction and “sat down on the curbing and wept freely and unashamed,” according to one report.

As the building smoldered, insurance claims were filed and officials began the search for alternate classrooms.

Principal G. A. Ketcham called it a “terrible disaster,” acknowledging students would now be scattered about town in separate spaces. Despite that, he asked the teens not to forget that they “are students of Missoula High. Let us hold our loyalty and our school spirit high even if we can seldom or never get together.”

“Let’s not be licked! Let’s carry on,” he said, adding, “I shall miss the constant personal contacts with you more than you would, perhaps, think.”

New textbooks were ordered from a Spokane dealer within days, although teachers were surprised how many school books the students had taken home the night before the fire. 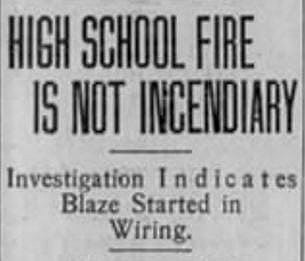 “Undaunted, re-enrollment began almost immediately,” recalls Don E. Mittelstaedt in an article on Missoula high school history. “Classes were held in the Roosevelt and Willard schools, in spare rooms during the afternoon at Montana State University, and in the Elk’s temple … and laboratory classes were held all day Saturdays at the University.”

With insurance money, and later a voter-approved bond to add more space, the rebuilding of Missoula County High School began. Winter breaks were shortened to allow more time in the spring for construction work. Commencement was held May 21, 1932, with 173 graduates – a record number.

By September, the new building, with enhanced fire-safety features, was completed and ready for students. School board chairman J. G. Randall was thrilled. “There is no high school in the country that is better equipped.”

Nearly 3,000 people attended the open house, excited to have a first look at the new structure that rose from the ashes.