Sixteen months ago, my wife and I traveled to Italy to see a concert and enjoy the sights. While in Genova, we got horribly lost — twice. The final time occurred on a long nighttime walk to the apartment we rented. We had to climb a building-lined rock stairway up a hillside that split into multiple directions.

Then, once we found the apartment, we couldn’t get inside, since the automatic lock had to be tripped via a cell phone, and our phones didn’t work in Italy. As we sat outside in the dark, trying to solve our dilemma, Annalisa Barla and Andrea Vian walked down the steps (they teach at the university, farther up the hill) and offered to help. With one of their cell phones, we tripped the lock and got inside. The next day, we met the two for a delightful lunch. They even paid!

I mention this because I contacted my new Italian friends, concerned about how they were weathering Italy’s COVID-19 pandemic. The response I received from Andrea was so powerful, I asked for his permission to share it with you.

As you read what he wrote, keep in mind that at this moment Donald Trump and his Republican allies are failing to take COVID-19 seriously and are even contemplating a rapid return to normal activities, for the sake of the economy. We must not let COVID-19 become like global warming, where one political party ignores the consequences for political and financial gain:

“Hi Marty! Hi Deb! Thank you so much for thinking of us. We are fine, but the situation around us is frightening. In a large part of northern Italy, the national health system has been overwhelmed. Doctors and nurses, friends of ours, are working in 14-16 hours shifts in hospitals so full of sick people that they are overflowing into neighboring cities. They are exhausted, physically and mentally. Without rest, they sweat hours and hours, every day, stuck in their protective equipment, far from their families.

There, 12 percent of the infected people are doctors and nurses. In many cities, we have reached the ICU capacity, and they are already performing war-like triage: people over 55 don’t get access to the ICU. It seems we don’t have enough testing capacity. So we fight in hospitals, trying to stop an exponential phenomenon instead of tracking and preventing it on the ground. So many people of all ages—even kids in their twenties—are getting badly sick. Many, many are dying every day, even younger than Annalisa and me. 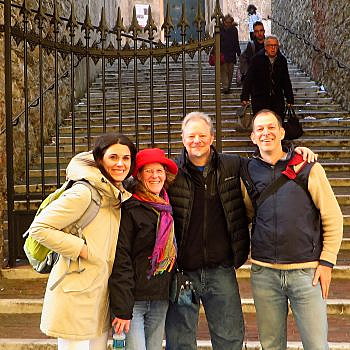 “Much more than the official numbers tell: people are dying alone, at home, as hospitals cannot accommodate them anymore. They are not tested, so officially they didn’t die because of COVID-19. In hospitals, the situation is tragic and poignant: infected people, often elderly, are isolated. Nobody can visit. So they die alone. No goodbye; no funeral. Marina, an aunt of mine in her seventies, so strong and healthy, just passed away. She has been brought to a hospital far from her hometown and far from her loved ones. It’s even difficult finding news about your friend, your father, your wife, your son, once they’ve been hospitalized, if unable to call or text by themselves. In the Lombardia region, there’s a one million people city called Bergamo, severely affected.

The day before yesterday, the local paper had 13 pages full of obituaries. There’s a surreal landscape, made of empty streets and ghastly silences, broken just by ambulances rushing in and the army carrying away the corpses. Our politicians have underestimated the emergency, and they have wasted so much precious time before taking stringent measures. It seemed like China was so far, so different. Does this virus, does any virus, care about boundaries or distances? For once, we’re all the same. I beg all my American friends to learn from our suffering and our mistakes: act now! Love, Andrea”

Marty Essen is a college speaker and the multi-award-winning author of five politically humorous books. He is currently practicing social distancing, sequestered in his writing room, working on book six.