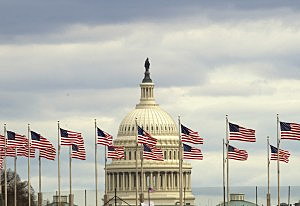 History provides many lessons for Americans to consider today. After America and Allies won WWI over Germany, many disillusioned German militaries maintained that they would have won the war but for those socialists and Jews who “stabbed Germany in the back” by signing an armistice ending the war: “The Big Lie.”

This fascist mantra became a constant drumbeat throughout the depression years from 1920 to 1945. The burning of the Reichstag – the German seat of government – was the concluding act of the national socialist (Nazi) takeover. They continued to convince the German people that the suffering of the German people was caused by the enemies within their country: the socialists, Jews, and liberals and their enemies from WWI.

Ultimately, WWII resulted in the Holocaust, 6 million people murdered, 85 million deaths worldwide, including the United States which suffered nearly 1 million deaths in our efforts to defeat fascists in Germany and Italy.

The German people became convinced by the propaganda of the National Socialists of their superiority and fear of the evil deceit of traitors in their midst (read ‘socialists’, and ‘non-pure’ Germans). In short, they were led by a sociopathic narcissist, a deviously effective propagandist, and an equally culpable minority dedicated to the leadership of the fuhrer, i.e. Hitler. Their pursuit of power and glory could only be achieved through their cult-like obedience to the fuhrer.

How does this relate to America today? Millions of Americans, including Steve Daines, Tim Fox, and Matt Rosendale were led to believe through constant misinformation and disinformation by the president, his followers, social media, and the Republican party about the results of the 2020 election.

And some politicians like Senators Hawley and Cruz simply tried to use the Trump movement for their own personal gain. They are told that America is going to hell by the libs, illegal immigrants, and people of color who cast fraudulent votes to defeat their leader, Trump. The constant victimhood perpetrated from the time Trump took office has now resulted in the mob attack – an attempted coup – on our nation’s Capitol building with the obvious purpose of denying the popular will of the people.

History’s lessons are evident. Spurred on by the drumbeat of propaganda, lies, hatred as well as unfairness to Trump they became participants. The “Stab in the back” is now “Stop the Stea.” They are led by a sociopathic narcissist who scapegoats America’s problems to the enemies within our country–the people who are not loyal to Trump.

Like the followers of Hitler, they will now blame others with indignation, deny any fault; but, without their tacit approval of politicians like Senators Steve Daines, Ted Cruz, Josh Hawley, and Representatives like Matt Rosendale this attempted coup would not have happened. They shall be forever judged by their complicity. And it will not be forgotten.

Many of them supported Texas in its Supreme Court suit and endorsed the disenfranchisement of millions of Americans. It will not be forgotten that these republicans supported an action that would lead to the collapse of American self-government–the popular will of the people. The assault on our nation’s capital that Americans fought and died for was the result of lies, propaganda, and racism led by the head of the Republican party and its sycophants.

You helped sow doubt into the minds of Americans about the value and legitimacy of our electoral system and the peaceful transfer of power. You and your fellow ‘Republicans’ are a disgrace to the American ideal because your patriotism is hollow and self-serving and your lack of integrity and honesty will be remembered as a seditious chapter of American history.