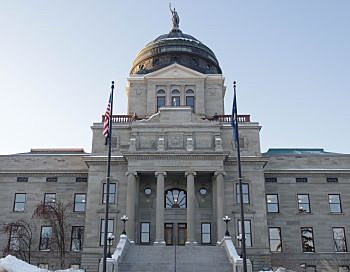 The leaders of Montana’s new Republican government have been fond of saying that they “are going to change how business is done in Helena.”

Who could have guessed that what they meant was corrupt self-dealing legislation, political slush funds, and naked power grabbing to pack the courts?

The raft of self-dealing legislation is head-turning. Let’s start with Speaker of the House Wylie Galt, who introduced several bills to grant large landowners a ten-pack of out-of-state elk tags for them to sell. Being that Mr. Galt’s family is one of the largest land owners in the state, he is quite simply legislating cash directly into his own wallet.

Representative Paul Fielder of Thompson Falls is pulling a similar stunt with laws controlling trapping. Mr Fielder is a trapper by trade, and is legislating a longer trapping season for wolves, and allowing for the snaring of wolves in addition to leg-hold traps. Again, brazenly bending the law to benefit himself.

Rep. Steven Galloway of Great Falls owns a substantial amount of rental property. He has introduced and passed multiple laws to advantage himself as a landlord, at the cost of his tenants. He has considerable help in this effort from his wife, Rep. Lola Sheldon-Galloway. As a husband-and-wife team of legislators, they are moving these bills to directly feather their own nest.

Rep. Ron Marshall is running an attack on smoking laws, trying to repeal the power of various levels of government to control vaping. Mr. Marshall owns several vaping shops. This is an outright attack on our health and on our kids, so that he can radically grow his own business. Even by the notoriously lax ethical standards of the Montana Legislature, this is outrageous.

There are a number of other bills of the same ilk. In my opinion, the only committee that should hear them is the Ethics Committee, and the only decision to be made is whether to censure these legislators for blatant self-dealing.

In my experience, an organization’s culture starts at the top, so we should not ignore the fact that our new Governor’s highest political priority for 15 years has been a tax cut for himself, which he has now arranged. And it is common knowledge in Helena that Mr. Speaker Galt is behind a bill to allow for cigar-smoking bars, because in addition to owning the purple mountain majesty he also owns a bar that he wants to upgrade to allow cigar smoking. He at least had the decorum to have somebody else carry that one.

Our new Attorney General Austin Knudsen, a former Speaker himself, has his brother Rep. Casey Knudsen carrying a bill to massively enlarge the ‘personal staff’ that agency heads may hire. The way it works now, each elected state-wide office holder and agency head can hire a few people as their personal staff, who are not subject to the civil service laws that govern the hiring and firing of thousands of state workers. This is reasonable, as these folks need a trusted team around them to help administer their priorities.

What the Knudsen clan wants to do is greatly expand this number. This will create a large number of at-will hires throughout the executive branch that would be what we used to call ‘patronage jobs’. Meaning, do-nothing jobs for political cronies and hangers-on, so that they can make a nice living off the taxpayer until it’s time for the next campaign. Given that all these offices are held by Republicans, this bill is a raw attempt to turn the taxpayer-funded state payroll into a political slush fund for the Republican party.

And finally, we have the court-packing bill. Senator Regier of Kalispell has passed a bill to permit the Governor to directly appoint judges to vacant district court and supreme court seats. This eliminates the current nominating commission that has been in place for over fifty years. It allows the Governor to recruit candidates himself, and appoint whoever he likes. You can take this to the bank: the fact that they passed this bill through both houses before the mid-session break means that this is one of our Governor’s highest priorities.

The reactionary right wing has failed for decades to elect Supreme Court justices to decree their fundamentalist, corporatist agenda. By appointing judges and justices directly, they leverage the well-known advantage that incumbent judges have at re-election time. Boiling this down, it means packing the courts.

This is what “changing how business is done in Helena” means. Crooked self-dealing, political slush funds, and court-packing. This is not the Montana way. The moderate majority needs to rise up and put these characters on a leash before they break something we can’t fix.

Brady Wiseman was a member of the Montana House of Representatives from 2005–2010. He made thousands of hours of field observations in Helena of politicians in the wild.