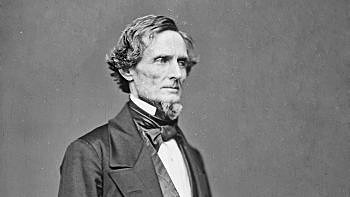 “African slavery, as it exists in the United States, is a moral, a social and a political blessing.”

Believe it or not, there are three places in Montana named in honor of the man who wrote those words – Jefferson Davis.

Yes, that Jefferson Davis, the president of the Confederate States of America and defender of slavery, white supremacy, and racism to his dying days.

Our five groups recently joined with the Confederated Salish and Kootenai Tribes (CSKT) in submitting a petition to the U.S. Board of Geographic Names requesting that it remove the name of Davis from those three locations in Montana. They include Jeff Davis Peak and Jeff Davis Creek in the Beaverhead Mountains northwest of Dillon, as well as Davis Gulch, just south of Helena in Lewis and Clark County.

Along with the CSKT, we’ve requested these places be given names that honor the area’s Native inhabitants and Chinese immigrants.

We’ve recommended the Board of Geographic Names change the name of Jeff Davis Peak to Three Eagles Peak, in honor of Salish Chief Three Eagles. He welcomed Lewis and Clark’s Corp of Discovery into the Salish camp in September, 1804 and gave the party food, horses and other gifts. (Charles Russell’s mural, “Lewis and Clark Meeting the Flathead,” depicts this encounter on the wall of the Montana House of Representatives.)

For Davis Creek, we’ve recommended Choos-wee Creek to honor the thousands of Chinese immigrants who worked in the mines, ran businesses, and made up a large portion of the population in Montana, especially Beaverhead County, in the late 19th century. “Choos-wee” is the Anglicized phonetic spelling of Čusw̓í, the Salish word for Chinese people. It refers to the single long braid or “queue” that many Chinese people wore at that time.

For Davis Gulch in Helena, we propose In-qu-qu-leet – a rough phonetic rendering of the Salish word that means Place of Lodgepole Pine. This choice recognizes how important this tree is in the lives of the Salish and other Indigenous nations, who use them as tipi poles and for other purposes and gathered them near the place in question.

Renaming these features with Salish terms celebrates the importance of the people who first cared for this land. It sends the message that Montanans understand our history and want to continue moving towards justice and inclusion for all people.

We’ve already heard opposition from a few folks that removing Davis’ name would somehow “erase” or “hide history,” as though General Sherman marched across Beaverhead County or that the Indigenous peoples of this state haven’t themselves experienced centuries of cultural erasure.

There’s simply no reasonable argument one can make for keeping Davis on our maps. That argument would have to be in defense of a man who so firmly believed in slavery that he started a war that took the lives of approximately 750,000 Americans and, a few decades later, wrote this: “It has been said that I should apply to the United States for a pardon. But repentance must precede the right of pardon, and I have not repented. If it were all to do over again, I would again do just as I did in 1861.”

The places we’re asking to be renamed are mostly on public lands. These lands belong to all Americans, and all Americans have the right to feel welcome to enjoy them. But that can’t happen if those lands are named in celebration of the likes of Jefferson Davis.

Montana has an incredibly colorful and diverse history, and Davis is thankfully not part of it. Let’s use names for our geography that reflect our state’s true history and make Montanans feel proud and all Americans feel welcome here.