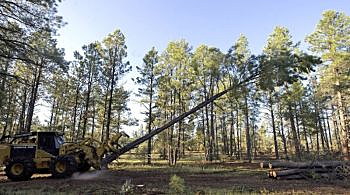 On July 23, the Alliance for the Wild Rockies received its second victory in the fight against the Hanna Flats logging project on public National Forest lands in northern Idaho. A federal court suspended the project in light of evidence that the government likely abused the legal process when it refused to conduct a public environmental analysis for this destructive project.

The Alliance filed its first lawsuit against the project two years ago, and the federal court suspended the project after finding that it violated the law. Despite the holding in the first court order, the Forest Service re-approved the project this summer.

The Hanna Flats logging project is located near the west side of Priest Lake in northern Idaho. The area is home to a dwindling population of endangered Selkirk grizzly bears. This tiny grizzly population is already failing three out of four recovery targets, and just experienced its highest mortality rate since 2008.

Roads and logging are the greatest threat to this population on these public lands. Yet the Forest Service refuses to follow its own rules and conserve this imperiled grizzly population. This refusal occurs even though the U.S. Fish and Wildlife Service just found that a reduction in conservation measures for the Selkirk grizzly bear creates a low probability that it will survive in the wild.

In addition to providing habitat for this rare grizzly bear, the Upper Priest River has the largest contiguous area of old-growth cedar, hemlock, and grand fir in the interior western United States and the largest concentration of ancient cedar stands in northern Idaho. The logging project is strongly opposed by local residents who cherish this unique area near Priest Lake, Idaho for its natural beauty and abundant recreational opportunities.

The primary legal violation in this case is that the Forest Service is trying to log this area without a public environmental assessment process, in violation of the National Environmental Policy Act and the Healthy Forests Restoration Act. The Forest Service falsely declared the area to be a “wildland-urban interface” and then claimed a ‘”categorical exclusion” from the legally-required environmental analysis based on that false declaration.

As it did in the first round of litigation, once again, a federal court has rejected the false declaration of wildland urban interface. The court held “it is not enough to simply declare that the Project is within a wildland-urban interface, especially when the intended purpose of doing so – as in this case – is to avoid the requirement of preparing an [Environmental Assessment] (or [Environmental Impact Statement]) as would otherwise be required under [National Environmental Policy Act].

There must be something else that connects the dots and thereby would support Defendants’ position that the categorical exclusion under [Healthy Forests Restoration Act] applies to the Project.”

As explained in Hanna Flats I, Bonner County’s [plan] uses a definition that is inconsistent with [Healthy Forests Restoration Act’s] definition of the wildland-urban interface…and cannot provide the justification for a categorical exclusion under [Healthy Forests Restoration Act].” Because the Forest Service violated clear federal law, the court ordered that the “Hanna Flats Project is SUSPENDED until further order of the Court.”