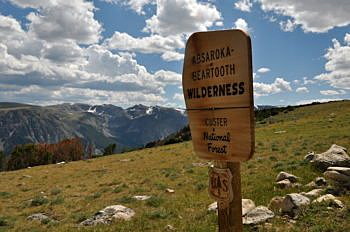 Recently, a guest columnist in the Missoula Current complained about the actions and beliefs of a select group of wilderness advocates nicknamed “wilderness purists.” His letter alleged these “purists” were a selfish lot who had an “all or nothing” approach to public lands.

Gallatin Wildlife Association wasn’t specifically named in the article, but many members of our organization were implicated.  Consequently, I will speak on behalf of our members and supporters to address the misrepresentations.

First, one could almost find a sense of pride in being called a “wilderness purist.” But in reality, no one is, not honestly. Everyone and anyone who steps one foot on wilderness land leaves a footprint, and that’s the problem. We’ve left too many footprints and too many imprints upon this earth and it shows.

We’re simply saying there needs to be balance. For far too long, that balance has been missing, favoring an overwhelming “take” rather than “give” approach concerning our natural world.

That letter conflated our goals and ambitions with those of the author; easy to do perhaps when you’re wealthy and you think everyone wants to be like you. His assumptions are wrong. We’re not doing this for personal gain. Does that make us radicals, or extremists? We say no. If you say “yes,” then that’s on you, not us.

The article implied we’re against compromise, just one of many misrepresentations and hyperboles mentioned in the article. We’ll compromise if warranted; if it’s ecologically justifiable and sound, but not before it’s necessary.

As an advocacy group for wildlife, how does one compromise away the ability for wildlife to exist? Because that is what we’re talking about here. Their existence has been compromised enough. Dare we say, we’re willing to lose this many species or animals? No. That’s arrogance. I’d rather be a “purist.”

Clinton Nagel is the president of the Gallatin Wildlife Association